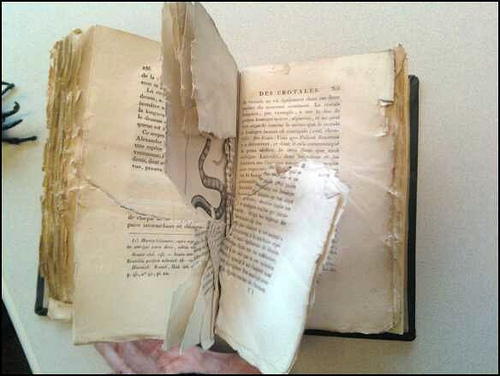 In my pre-marriage, pre-child years, I witnessed a variety of kids throwing tantrums for everything and nothing and the parents, who would stand around as innocent bystanders. I used to vow to myself,  “If I ever have a child, I will never let him/her behave that way. I will be a very strict Mom and discipline my child accordingly.”

Then, when I was pregnant, Hubby and I would debate on how each of us would behave if our kid did something ‘wrong’. For instance, as a book-lover, I hate if any of my precious books get torn, damaged or hurt in any way. Hubby wanted to know what I would do if our baby tore one of my books. My answer was simple, ” I would get really, really mad.”

Yesterday, my son tore out the first page of the book P.S. I Love You. And all I did was take away the book and hug him 🙂

I gradually am learning to turn a blind eye to such trivial things.

I often see my son grab something and put it straight into his mouth. Immediately, I pipe up and either scold him for the act or pull it away from him. My reasons are simple: the thing he is trying to pop in his mouth may have dust and dirt on it and I don’t want him falling sick over it.

Yet, before I remember to take it away gently from him, the words are out of my mouth and I have already yanked the ‘toy’ away. And then, just for an instant, I see the shadow of hurt passing across his face.

Another time, when he was very cranky and whiny, I lost my temper with him. He was hurt and came crying back to me (the perpetrator of the hurt) to be consoled. I don’t think I could put into words how devastating it was to console him, knowing that I had hurt his little heart.

I was so filled with regret and grief for having been so brusque. After all, he is just twelve months old and doesn’t understand anything that adults do or feel. All he needs is to be comforted and all will be right in his world.

As a mother, you are the most important thing in your child’s life for at least the first 10 years. You are the single person who can most influence your child, for good or bad. Your child will try to ape you—talk and walk like you, use the same phrases and imitate you—trying to be just like Mom. His self-esteem is only what you make of it: if you think your child is a great little person, that is exactly what he will think of himself; if you think he is a loser, then that is what he will consider himself to be.

I have a short temper and I am still trying to control that. I hope I can at least manage to do this with my Little One, who is the most precious thing in my life.

How do you react when you are at wits’ end with your kids? Do you get mad at them, or do you try to console/reason with them?

This is an original World Moms Blog post from our book-loving mom from India, Fire Crystals. You can also find Fire Crystals on her personal blog, Merry Musing.

Photo credit to http://www.flickr.com/photos/wentzelepsy/4368668388/.  This photo has a creative commons attribution license.

Fire Crystals, born in the Middle Eastern country of Kuwait, is now a techie living in the state known as God’s Own Country in India. Her interests are books (her favourite!), blogging and computers. However, with the arrival of her little one, sleep is another activity that is fast making her top 3 list! On another note, this mother dreads her kitchen like the plague! She hates cooking, especially Indian cooking due to the large variety of spices and things that need to go in to make it palatable, though she has no qualms over devouring any product from the cooking range. However, the thought of having to do any major cooking still makes her all flustered and anxious.

Fire Crystals has an 11-month old son and a wonderful Hubby, two of her favourite people in the world. (Awww, how sweet!) Both support her writing initiatives: her Hubby by reading her work when she pesters him enough, and her son by helpfully hitting all the keys on her PC. She has recently become a rejuvenated writer since starting a personal blog and then letting it rust away in some unknown corner of Blogger. After her son was born last March, Fire Crystals had an epiphany in the form of a blogger friend who had discovered her under-used blog and encouraged her to write again. So, after a hiatus of 2 years, she transferred her belongings to WordPress and began blogging again. And, this time she was reeled back in -- hook, line and sinker!

Fire Crystals came across World Moms Blog soon after it’s launch, and admits to being addicted to the articles in it. Now, she is thrilled to be a World Moms Blog contributor, too! She hopes her bevy of experiences as a newbie mother will add variety to the blog and enrich it, and sends out a “Namaskaar!” (salutations) to all our readers! You can also find Fire Crystals on her personal blog, Merry Musing.

« Travel Itinerary for the Week of March 14th!
WASHINGTON, USA: Searching for My Inner Domestic Goddess »