When you are the granddaughter of an Anglican minister and you marry an ardent atheist, religion is one of those things you discuss carefully before you have kids.

The brand of Christianity that I was raised on was very… metaphorical. I wasn’t asked to believe that God was actually a bearded man in a nightgown, or that Adam and Eve were real. My mother taught me that hymns and prayers were simply a way to reach God (whatever God may be) in a way which was familiar and comfortable. It was a matter of tradition and culture as much as belief.

My husband, on the other hand, comes from American parents who rebelled against their own parents’ Bible Belt values. His grandparents believed in the Bible in an extremely literal way which violates his scientific and logical mind. He associates religion with closed-mindedness, homophobia, creationism, racism, and sexism, all of which he detests.

To him, religion and fallacy will always go hand in hand, forever and ever, amen. No matter how many arguments we had (and I gave up on them years ago), I could never help him see that people can be religious without being… well, WRONG.

At my mother’s church, they don’t urge us to convert the unwashed pagans of the world. They don’t threaten us with hell if we use God’s name in vain. They don’t care if homosexuals want to marry, and they don’t actually believe that they are really eating the body of Christ when they put those little wafers in their mouths.

But in my husband’s mind, Christianity and Fundamentalism are inseparable. If you are Christian, you must believe in a literal, anthropomorphic God, and therefore, no logical, intelligent mind could ever really be religious.

So, I laid down the law before we even got married: when we have children, they were going to be baptized.

Not because I believe that babies need to be saved from purgatory (I’m more of an agnostic than a practising Christian), but because it is a tradition. Every culture, it seems, has a ceremony to formally name the baby and welcome it to the community. In Canada, there is no really secular way to do this yet, though. It’s the church, or not at all.

Besides, I knew it would be important to my mother.

Since my husband doesn’t actually believe in any of this, and because he knew that it mattered to me and to his mother-in-law, he didn’t object. He just sighed and prepared for a boring morning in church.

So, when we were home in Nova Scotia this summer, we christened our son. 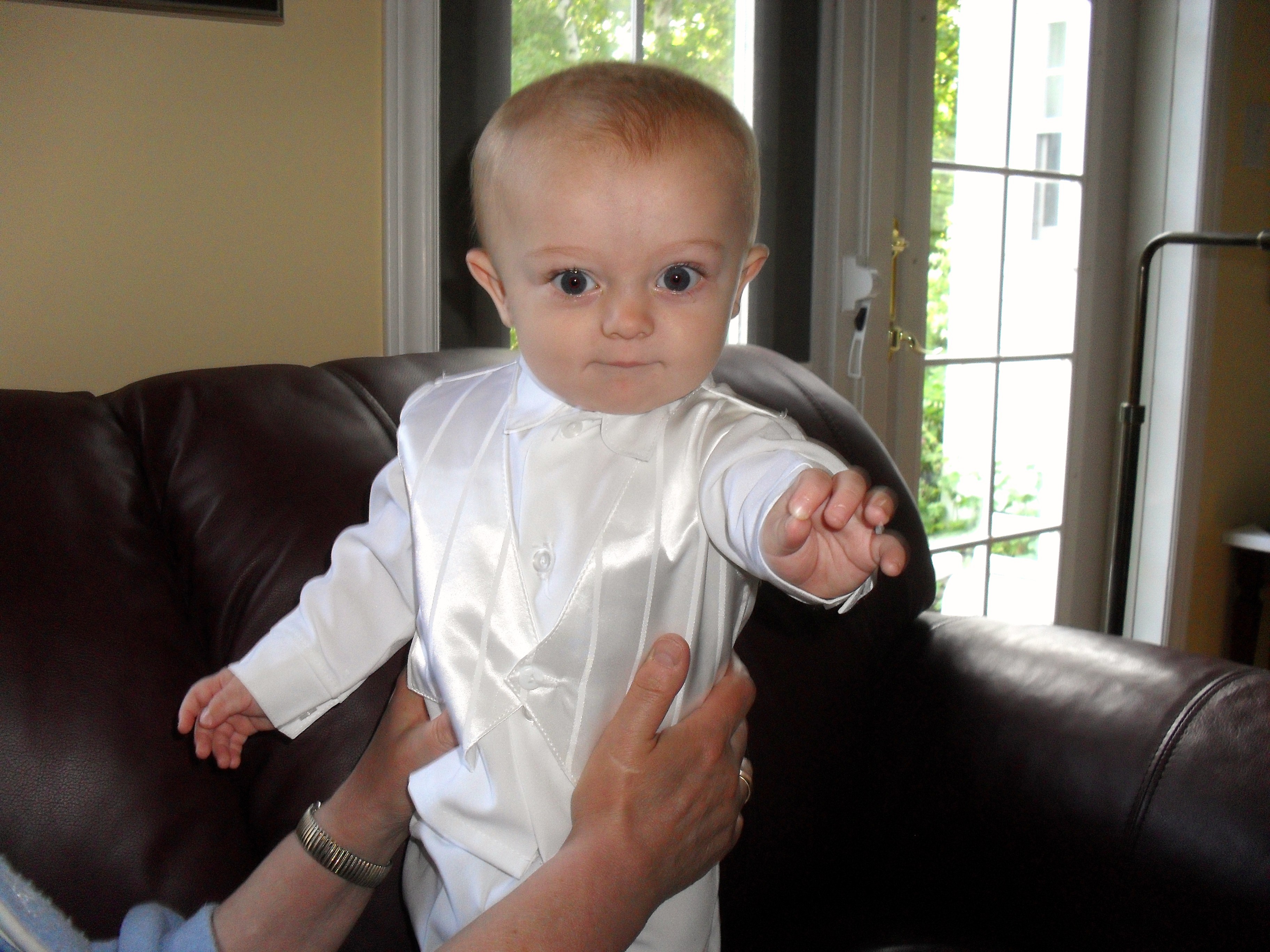 "Demons of illogic, I cast thee out!"

After the ceremony, the church had a regular service. Our Babby was quite well-behaved, mostly, and he chewed on his chews and babbled quietly to himself.

About half-way through the minister’s sermon, however, Babby’s voice echoed through the crowded room.

…My husband was delighted, and he looked at me with a jubilant expression.

Did you have a religious celebration for your child as a baby?  Do you have any religious rituals that you debated with your spouse or partner?

This is an original post to World Moms Blog by Carol from If By Yes of Vancouver, Canada.  She can be found writing at her blog, If By Yes.

Photo credits:  The photo of the actual baptism with priest was used by the author with permission by Randi Yeats Photography. The second photo of the baby is credited to the author.