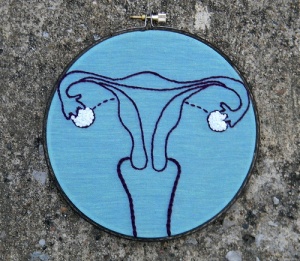 In France, perineum strengthening goes way beyond your classic Kegels, and it’s taken very seriously by the doctors.

I remember, after having given birth to my daughter in NYC, the doctor saying that nothing “goes in” for six weeks following the birth. No bath, no tampons, no nookie, no nothin’. Here, in France, the story is a little different.

No advice on what goes “in” or “out” following the birth, but it’s out of the question to do any sort of physical activity until you have first done your perineum reeducation, and then your abdominal reeducation.

In other words, if you’re French and if you’re up for it, you can jump right back in the saddle the same week you gave birth (why deprive yourself or your partner of l’amour?), but you must complete your 20 sessions of perineum and ab work before you contemplate, say, bending at the knees.

You will be enlightened as to what a perineum actually is on your very first visit with the specialized physical therapist or midwife. It’s not simply, for instance, a small membrane that sometimes tears or gets cut when you birth a 9-pounder. Nooo. When you see the model, you understand that it’s a huge hammock of muscles that stretches from one hip bone to the other and curves upward to hold all your organs in place.

Following the enlightenment, comes the practical.  The gloves come on and the therapist’s fingers go in, stretching first this way, then that way, in a sort of finger split as you are requested to squeeze the fingers back together. This is to make sure you know exactly which muscles are to be utilized so you don’t make the grave error of squeezing the wrong ones.  There are many muscles down there.

Then out comes the “sonde.” That’s a … a … how do I say this? … sort of a stick with metal bands around it and a cord that plugs into the machine, which then jolts your perineum into submission.  It basically tightens the muscles without you doing anything. (Insert every French husband’s joke about how there is no need to buy a “sonde” when there’s a perfectly good one at home). Contrary to what you might think, it doesn’t hurt when inserted properly but it kind of buzzes in a not-so-fun way if the sonde slips down too low.

After about 10 minutes of this where you’re just lying there, holding it in place, and trying not to roll your eyes at how ridiculous you feel, it’s time for you to whip that perineum into shape yourself.

The sonde is still attached to the machine, but now a path appears on the screen, sort of like a yellow brick road, and you’re supposed to follow the path. When you squeeze, a blue line appears and goes up and down in function with how hard you’re squeezing. Your job is to follow the yellow brick road by making the blue line go up and down (squeeze more or less) in order to stay on the path.

“It’s like playstation for moms!” said my first PT with delight.

The PTs who do this remind me of sex-education teachers. They are completely at ease with themselves and the natural functions of the body.

I had one brag about her perineum prowess in “climbing the spiral staircase” and how happy that made her partner.  I’ll leave that to your imagination (or your eyes shut tight and your hands clapped over your ears, shaking your head nooooo).

You leave these sessions tired. Seriously – it’s a workout – and you don’t want to sneeze out of turn until your muscles have had a chance to rest. But after 10-15 of these sessions, twice a week, you’ll feel like you’re 20 years old again and can sneeze, laugh and trip with the best of them. Next up in postpartum healing: the government-paid sit-ups.

Then, and only then, are you allowed to bend at the knees.

This is an original post to World Moms Blog from our writer in Paris, France, Lady Jennie. You can also find her blogging at A Lady in France.

Photo credit to Spec-ta-cles. This photo has a creative commons attribution license.

Jennie has lived in Taiwan, New York City and East Africa, and currently lives just outside of Paris with her French husband. She speaks rudimentary Mandarin, passable French and has had a varied career in Human Resources, Asian financial sales and humanitarian work. She is currently a mother to three young children, with writing and teaching gigs on the side, and blogs at A Lady in France.

« SOCIAL GOOD: How a Trip to a Third-World Country Changed My Life
ILLINOIS, USA: Don’t Dread the Routine »