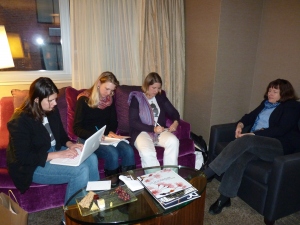 On January 29th, three members of the World Moms Blog editorial team—Nicole Melancon, Kyla P’an and WMB Founder, Jennifer Burden—traveled to Washington, DC to attend a summit focusing on the Shot@Life campaign, hosted by the United Nations Foundation. The following is excerpts from an interview we conducted with the campaign’s Executive Director, Peg Willingham, about Shot@Life, the UN Foundation’s new global vaccination initiative:

World Moms Blog: Peg, can you share some background with us about the UN Foundation and how the Shot@Life campaign evolved?

After hiring a director, the second employee at the Foundation was hired to head up the Polio Eradication Initiative, a collaboration with UNICEF (United Nations Childrens’ Fund), the World Health Organization (WHO) and Rotary International. In the past decade, these organizations have made huge strides in the eradication of Polio and India is very close to being able to declare that it’s Polio-free.

In 2001, the Foundation started the global Measles initiative, along with the American Red Cross. Since its launch, 1 billion children have been vaccinated through this program and world-wide measles outbreaks have been reduced by 78%.

Successful initiatives like these got the attention of American philanthropists, Bill & Melinda Gates, who had a deep desire to launch a major campaign focused on global vaccinations. This is where the Shot@Life campaign began.

WMB: What exactly is the Shot@Life Campaign?

PW: Shot@Life is a collaborative initiative with six partner organizations. The goal is to immunize children around the world from four of the most deadly, childhood diseases: Polio, Measles, diarrhea and  pneumonia. Every 20 seconds, a child dies from a vaccine preventable disease and unless we eradicate a disease everywhere, you are not safe from it anywhere.

This year, 1.7 million children will die from diseases that have all but disappeared in the developed world just because one in five children around the world does not have access to the life-saving immunizations needed to survive.

WMB: What do you hope will result from this DC summit?

PW: Shot@Life is an awareness campaign. Our first aim is to create a movement of Americans who care about and support immunizations for children in developing countries and from there to spread the movement globally.

We have gathered 45 people together for this summit. Participants range from a teenager in the Model UN to a grandmother working in social advocacy. We have writers/bloggers, healthcare professionals, people on educational boards and in professional networking groups.

We are hoping that by educating you all about the importance and need for global vaccines, in return, summit participants will be the “yeast” that helps this movement “rise” through advocacy, fund raising, social media, and connecting with local politicians.

PW: Yes, I have a daughter who just turned 16. She has had all of her vaccinations. I have experienced first hand how effective vaccines are and how important it is to provide access to vaccines for mothers around the world.

But I don’t want to provide just my child with vaccinations, we need to be able to provide every child with a shot at: playdates, temper tantrums, a first day of school. Every child deserves a Shot at Life.

Do you have questions for Peg Willingham or about the Shot@Life campaign? What milestones do you think every child deserves a shot at?

This is Part 2 in a three-part series about the WMB’s involvement with the Shot@Life campaign. You can read Part 1 from Jennifer Burden here. Stay posted for Part 3 from Nicole Melancon.

« MASSACHUSETTS, USA: Poetry Is A Language That Stretches The Mind
INDONESIA: The New World of “Help” »