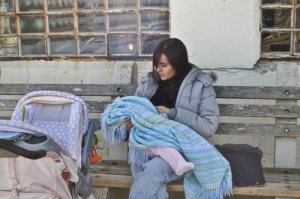 A while ago, during a nice lunch in a restaurant, I had to feed my two-month-old daughter. The moment I put her to my breast (completely covered, by the way), a constant whispering and eyeballing from a table across us made me feel like I was doing something wrong. These were young people, among them a mother herself.

A few days ago, I read an article in which the childless author said that breastfeeding a three-year-old kid is longer then the public expects to see, that it’s “gross”, and those moms are “whacky”.

Sometimes I have the feeling the public expects not to see any women breastfeeding, no matter how old the child is.

While in the restaurant, I felt like those people pointing and looking at me had the same opinion as the narrow-minded author of this very low-valued article.

I grew up in a playground packed with breastfeeding mammas who were not ashamed to show a little bit of a boob-skin while doing so. Nobody would laugh or be grossed by it. We all knew: IT’S NORMAL.

I want to mention that even with all the critics the TIME cover has received, I personally really like it.  However, I do not appreciate the caption that came with it. Maybe they meant no harm but they shouldn’t be using breastfeeding as a focal point to compare mothers and parenting styles. There is much more to motherhood (parenthood) than breastfeeding.

Being a mother of two who has never experienced a natural childbirth, I am outraged when I hear that the experience makes you more of a woman and a mother. Being a breastfeeding mamma, I feel the same when someone uses the same words describing  breastfeeding. I was raised by a mother who couldn’t breastfeed any of her three children. She tried her best, but it didn’t work. Her body didn’t produce milk fat enough for her babies to grow. She has never felt she is less of a mother because of that.

Who are those strangers to tell me what makes me a better mother and woman?

Because all of that fuss about breastfeeding there is a horrible burden put on mothers’ shoulders: YOU MUST BREASTFEED! (at the same time it would be better if you do it in private).

Recently, a new picture of breastfeeding mammas that appeared in media seems to shock the public. There are many comments following it, from “how dare they” to “gross” to “it’s like defecating in uniform”.

I think breastfeeding is a fundamental right and it shouldn’t be such a taboo.

I want to ask: “What’s wrong with you people? Where is your common sense?!”  In my opinion, you can see more boobs (not mention others parts of the body) poking out while walking around the shopping malls these days. Is anybody shocked?! Are those girls are asked to cover themselves in order to eat at a restaurant?

It’s sad, that’s what I think.

What do you think about breastfeeding being taboo?

Ewa was born, and raised in Poland. She graduated University with a master's degree in Mass-Media Education. This daring mom hitchhiked from Berlin, Germany through Switzerland and France to Barcelona, Spain and back again! She left Poland to become an Au Pair in California and looked after twins of gay parents for almost 2 years. There, she met her future husband through Couch Surfing, an international non-profit network that connects travelers with locals. Today she enjoys her life one picture at a time. She runs a photography business in sunny California and document her daughters life one picture at a time. You can find this artistic mom on her blog, Ewa Samples Photography, on Twitter @EwaSamples or on Facebook!