World Moms Blog is working with GAVI Alliance to create an international documentary to raise awareness of the importance for life-saving vaccinations for children in developing nations.

We plan to do this through the “GAVI Global Tea Party”, created, here, at World Moms Blog. A team of contributors from World Moms Blog host a party and discuss the significance of vaccines and plan on spreading the word to advocate and support saving the lives of chidden in developing nations.

I eagerly accepted World Mom Blog’s founder and Shot@Life supporter, Jennifer Burden’s, invitation to host a party in India at my residence because I believe in GAVI. I believe in what GAVI supports. I believe that every child should have a chance at life. I know that somehow saving a child’s life is very important in the evolution of the planet. It all started with an email from Jennifer with a very glamorous subject, “Would you like to be a movie star?” Wow, Yes, for this important cause I would, wouldn’t I?

I started planning. I had to first find a videographer. I put up a status messages on Facebook. I asked around to all my friends and made them put up status messages, too. This went on for a month, and I almost gave up. One day, a childhood friend and photographer told me that he knew a videographer who would be willing to help. So, Srinivas and I started talking and things clicked. The party was meant to be!

I called up a few friends and gave them the background of this party and more importantly, why I support this cause. There is at least one child dying every 20 seconds due to a vaccine preventable disease, and we could do something to stop it. The enthusiasm was contagious and all of them said yes to the party. I had a star guest for the party too – my own 90-year-old grandmother who is a mother, a grandmother and a great-grandmother too. Yes, oh yes, the party was taking shape!

I was still feeling nervous and so edgy that I emailed Jennifer at least 25 times on the day before the party. This wonderful woman replied to every one of the mails as soon as she received it. It must have been the middle of the night for her. Yes, she did not sleep the whole night, stayed up and calmed every one of my fears.

I made notes. I was absorbing all the information available about GAVI and vaccinations. I was worried about the conversation flowing around during the filming of the party. What if we came to a standstill, where no one was speaking? What if everyone started speaking about playdates and tantrums and picky-eating and we lost the main focus? What if? What if? What if?

In the end, the party took on a life of its own. The GAVI videos we saw were such great conversation starters. We saw a video about a mother losing her child in Nicaragua and another one about diarrhea and pneumonia in Sierra Leone. We take so much for granted here, but at least 45% of deaths are due to just these two diseases, which are apparently not even killer-diseases if managed properly.

My friends were moved with the Sierra Leone video. My fears were put to rest when I just listened to my friends speaking from the heart about how they strongly felt the need to support the cause of vaccination. I just had to allow them all to feel. The conversation then steered towards India being declared Polio free by WHO. My 90-year-old grandmother was the star of the movie, I should say. Look at this collage below to know how it all went. 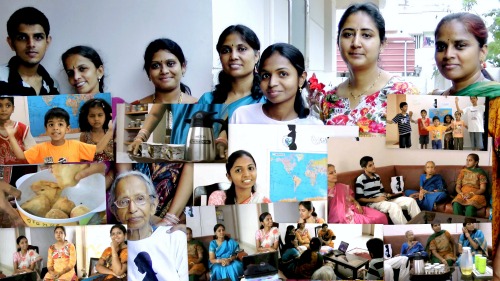 Party with a purpose!

Most of the guests took the spirit of GAVI back with them. They said they were going to speak about it with their colleagues and friends.

I should thank all my friends and my grandmother for the success of the party. Her presence and words were strong enough, and her wisdom was truly noteworthy. Her words set the tone for the party –

“One generation’s effort in strictly adhering to the immunisation schedule will carry on for all generations to come, to help eradicate a particular disease. That is how small pox and polio were eradicated in India.”

(In her children’s generation small pox was eradicated, and in her grandchildren’s generation polio was eradicated). In her times and her children’s time all this was done by only the government in whatever way it could, by the personal interest of some physicians and a few people only. But today she feels that organisations like the GAVI Alliance and Shot@Life with a great public appeal and huge voices are a god sent blessing, indeed.

GAVI affected everyone’s lives that day including our children. Check out the below photo of them chorusing, “We want a disease-free world.” 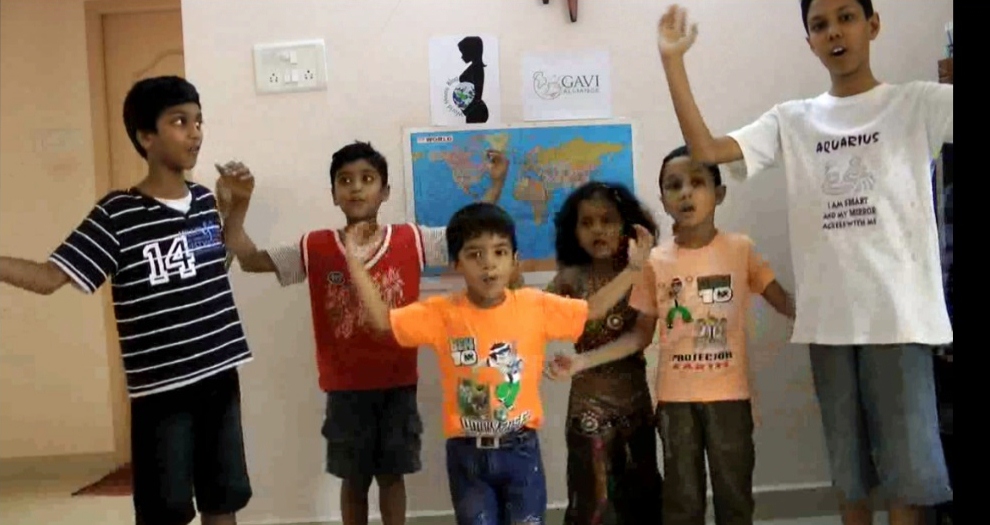 “We want a disease-free world”, the children’s chorus.

I started viewing GAVI with a different perspective myself.

Indian Vedic texts say that the human life is the highest form of life and evolution at its peak. And blessed is a soul to be born as a human being and while he/she is given a chance at it, definitely efforts must be made to preserve life, nurture it and utilise it to the maximum benefit.

We had four generations of people assembling that day to help humanity and make this world a better place in their own tiny way. Though I hosted the party,though my grandmother’s wise words set the tone of the party, I think it was a team effort by all of us here –  World Moms Blog contributors, our fans and readers for supporting our causes of social good and advocating for organisations like the United Nations Foundation, their Shot@Life campaign and the GAVI Alliance. We are all here striving to make this world a happy, healthy and peaceful place.

This is an original post to World Moms Blog by Purnima, our Indian mother writing from Chennai, India. Her contributions to the World Moms Blog can be found here. She also rambles at The Alchemist’s Blog.

A team of World Moms Blog contributors have been hosting GAVI Global Tea Parties around the world to help launch an international grass-roots effort of advocacy for life-saving vaccinations for children in the developing world.  The parties are being filmed for a documentary. If you are also interested in hosting a party of your own, please drop us a mail at worldmomsblog[at]gmail[dot]com.

« CHINA: Feng Jianmei and the Forced Abortion Issue
AUSTRALIA: Is This the New ‘Useless Generation?’ »