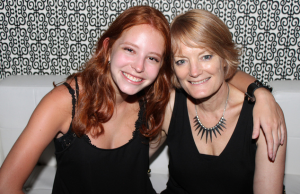 How would you keep your child safe from a persistent bully and a stalker?

I was thrilled when Jen asked me to write a post about online safety for kids/teens for World Moms Blog. I have two children, a boy and a girl. But it is my daughter’s story I’d like to begin with. My daughter has been modeling and acting since she was 8 years old and is very pretty, so we’ve been dealing with safety issues both online and off since she was small.

It started with a bus driver one afternoon on the way home from school. He found out it was her birthday, as we were carrying bags of presents. For some odd reason, he wanted to give her his 20-year service pin as a present. We gracefully declined. Over a month later, I was rushing up to the front door of my apartment, and he jumped out of his car and said, “I have a present for your daughter. I haven’t had time to wrap it.” He then proceeded to get the present out of his trunk.

It was a video called Super Girl whose name was the same as my daughter’s. All I could think of was, “What if he had put her in his trunk? Why was he in front of my apartment in his car?” The next day I went to the police station. They told me I had reason to have concern and to report it to the MTA, as they would know who he was based on the route. I then had to sit my daughter down and explain to her never to take his bus if she saw he was driving and how she needed to be careful. Nothing like having to tell your child scary people exist who could potentially want to harm them.

She then went to summer camp where a girl bullied her. My daughter was so upset and could not get the attention of the camp so she told them she was going to commit suicide. I brought her home from camp and took her to a therapist and together we devised a plan for how to deal with bullies and she carried this back to camp.

This same bully’s parents divorced. The girl moved to NYC with her mother and ended up at my daughter’s school where the issues continued. I moved her to another school. At this point, my daughter was online. The bully continued on Facebook. So we blocked her. Then the bully went to other mutual friend’s Facebook pages and posted mean comments about my daughter. I was at my wit’s end.

So I called in professional help. There are numerous online safety organizations and we just so happened to have one as a client. Immediately they gave me the steps to take. I finally had a plan. We took action and that was the last of it, or so I thought.

For all its positive force, social media still has a dark element. Parents need to know their “denial” is a predator’s best friend. And not to scare you, but just look at these three statistics:

• Nine out of 10 parents will never know there was any inappropriate contact made on the Internet. We’re clueless.

• 20% of children age 10-17 have been solicited sexually online. That’s one out of every five kids.

• Many parents still don’t have rules about what their kids can do on the computer.

So how do you protect your child?

2. Play act. My daughter and I would go through different scenarios. “If a man comes up and says your mom is hurt, she asked me to take you…” It helps them understand.

3. Get information from online safety sources.

4. Teach them the difference between reporting and tattling. Tattling is getting someone in trouble. Reporting is about the safety of yourself or the safety of others.

5. Teach them “Check First.” If your child is the child that is so used to checking first with you in Elementary School – they will be the children who calls you when they are 16 and their friend is to drunk too drive. Why? Because they know they can.

6. Don’t be afraid to call in professionals.

My daughter leaves for Syracuse in a few short weeks. Guess what? The same bully is going there, too. What are the chances of that happening? So I called the University. It took several phone calls, but I finally got to someone. I requested they not be in the same dorm. It won’t stop something happening on campus or online, but they won’t be in the same living space. And my daughter reached out to the girl and requested they put things behind them and move on. We shall see. And my daughter is armed with options on how to handle things.

About MOMentum:
Holly is the President of MOMentum and focuses singularly on helping brands connect with moms through social media. She is the founder, a social media expert and one of the few women to have her name on the door of not one, but three agencies.

She is avid about using her social media skills and community for social good and works with United Nations Foundation Shot@Life as one of their Champions. She recently traveled to Tanzania on their behalf to meet moms and children first hand. She’s also lived on $1.50 a day to raise money and awareness for Global Poverty Project, supported Christy Turlington’s Every Mother Counts launch and is currently working with 10 X 10, an organization supporting the education of girls.