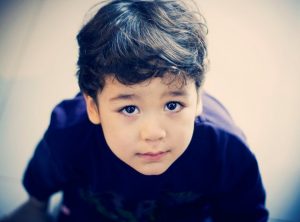 My son is not even 6 years old. He’s a December baby. Who knew this would be a dilemma once they’re around school age? This means that he either starts school a little early or a little late.

We opted for the latter.

Yes, he is the eldest in his class: K2. His physique looks bigger than those of kids his age. He is one of the taller and older kids in his class. Most people think he’s way older than 5 years old.

Yet he still has that babyish side on him.

Do I get frustrated? Of course!

He is a sensitive child, always been. He cries easily, and he tends to be shy around new people. This is something that I noticed since he was a baby.

Both of us, his parents, are very outgoing borderline crazy-loud sometimes! It  makes me feel guilty when I see him get so shy. Sometimes, he just shuts himself down, not wanting to say or do anything. When he was much younger, a full blown tantrum was a common, daily thing. These days, he prefers to just not say anything, closes his eyes or just pretends to be sleeping.

His sensitive side sometimes causes him to cry over little things. Sometimes it’s made me want to pull out hair in sheer frustration. Part of me feel like I failed him in some ways.

His teachers said he still cries in class sometimes and his classmates would tease him for it. My heart is breaking! I fear he will be subjected to bullying because of this. The teachers said the other boys just smile, but they don’t say anything bad. At least, that’s what the teachers observe, but who knows what they are aware not of?

Mr. X handled this better than me. Sometimes I think I just don’t have enough patience, because it really drives me insane whenever my son starts crying for no obvious reason. God only knows how many times I’ve gone down to his level, looked at him straight in the eyes and asked what is wrong. God knows how I’ve let him use words instead of tears to express how he feels, and how I’ve told him that he doesn’t have to cry every time he is upset. Sometimes this tactic works, sometimes it doesn’t.

Either way, I’m that awkward Mom with a super shy kid at social gatherings.

But I don’t want to tell him he needs to toughen it up. I won’t tell him that crying is for girls and babies, which is what many people have told him. His sensitivity is part of what making his soul is so beautiful.

He will start Elementary School next year. Naturally, I worry for him, for my sensitive boy. He seems to love the school he will go to, and I can only pray that by the time school starts, things will be better for him, and that there will be less tearful adjustments.

Do you have a sensitive or shy child? How did you help them through it?

Former nomad, Indonesian by birth, mom, travel junkie, healthy living enthusiast. Maureen is blogging her way on a new journey in finding joy in life, one scoop at a time at her blog: Scoops of Joy

« ISRAEL: Far From The End — Coping with the Missiles Attacks in the South
Saturday Sidebar: How do you intend to celebrate your year-end holidays? »