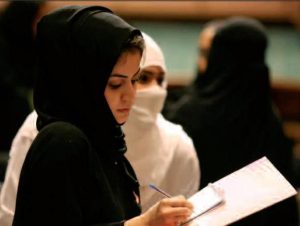 All my life I have been surrounded by powerful women and respectful men. I come from a family where the girls definitely outnumber the boys by a huge margin.  My mother worked all the time I was growing up in different charities and foundations. Some she co-founded. My grandmother is a woman people go to when they need help or support (both men and women that is). My aunts and female cousins are entrepreneurs and business owners.

All these women around me travel when ever they want to. They make their own choices. They are usually the main decision makers in the family. We are free, we are self reliant, we are independent, and nothing can stop us.

Except that we are not free, we cannot be self reliant and there is no such thing as independent where I am. I am free but for the grace of the men in my life.

A friend of mine traveled with her girl friends to Dubai for a weekend last month. In her passport, stapled to the last page, is a little paper with her husbands signature on it that says he gives her permission to travel.  This little paper was given to her by her husband a while ago, and she can forget about it easily when she decides to go away for the weekend. The fact that if she doesn’t have that paper she wouldn’t be allowed out of the country is tucked away in the back of her mind as it is in the back of the minds of all the women I know.

When the plane descended in to Dubai airport and my friend switched on her phone, she found  her husband had sent her an image of a message he got by text informing him that his wife (his property, his goods, his thing) has left the country heading to Dubai. The insanity has gone high tech.

Not only can women not leave without permission from their men, but the men now get informed of when she left, where she left from and where she’s headed.

It baffles me… It leaves me speechless. I just add it to the list of things we as women cannot do without permission from our men. (Get surgery, open a bank account for our kids, buy a car to count a few). And all of these things are to protect us women. My question is what do we need protection from? I mean, what is this big bad thing out there to get us but not all other women on the planet?

As I said before, I can easily forget these things because the men in my life do not treat me as their property. I am a person just as much as they are and I have been since the day I was born. This is not the case with many people though.

When a boy grows up seeing that his mother and sisters cannot actually live their lives without the permission of the men how are they supposed to treat them like equals?

A woman I know lost her husband a few years ago. She also lost her father years before that and now has to get her 16 year old son to sign a paper giving her permission to leave the country. How is she in turn supposed to, for example, ground him the week after? If only on a subconscious level he knows his mother is not viewed as equal to him.

This all happens in the same country where women and men get paid the same for doing the same job. Where there are more female entrepreneurs  than men. More female graduates that male. Saudi women have won multi-million dollar grants in the fields of science and health. In a country where there is no such thing as a meek Saudi woman! If you ever get the chance to meet a Saudi woman you will know this is true.

We are not meek, but we are not bothered by these things. Or bothered enough by them. Because if that woman who lost her husband and father didn’t have a son she would be in a kind of limbo. Who would be in charge of her? Who would sign her papers?

This is my reminder that it is but for the grace of the men in my life that I am free. I know for a fact that none of them will ever use this power to keep me from doing anything but the mere idea that they could if they wanted to is not OK.

In what subtle or unsubtle ways does your society send you messages about the role women should play?  What would you change, if anything?