It takes a lot for me to leave my family behind for a week like I did to go to Uganda. Actually, it was the only time I’ve ever done it, sparked by an URGENT matter.  Did you know that every 20 seconds a child dies from a vaccine-preventable disease?
Doesn’t sound pressing enough?
Well how about some math…: 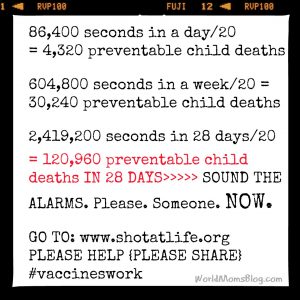 In the time it takes for the Shot@Life 28 Days of Impact campaign to run through the blogosphere, statistically,120,960 children will succumb to vaccine-preventable deaths in the developing world.
And February is the shortest month.

That is 1.5 MILLION children in a year will die a death that we could have helped prevent for a few bucks. Yes, a few bucks, even just one buck, in some cases. It’s so simple.

Last October I left my family for a week and flew to Uganda with a delegation from the UN Foundation’s Shot@Life campaign.  Having the chance to meet incredible UNICEF and health workers on the ground, such as Miriam Lwanga and Edward, I got to speak openly and one-on-one about infectious disease and Ugandan culture. The delegation was there to observe UNICEF’s Family health days, which involved dozens of community health volunteers, trying to make a difference in their communities and succeeding. 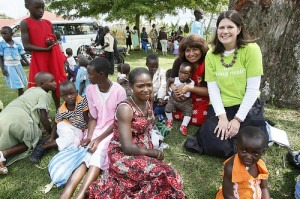 Just a few weeks ago, I spent a few more days away in Washington, D.C. lobbying on Capitol Hill for vaccines and global health and helping to rally a group of my nation’s most enthusiastic activists from around the U.S.. They are the most recent graduating class of amazing Shot@Life Champions! 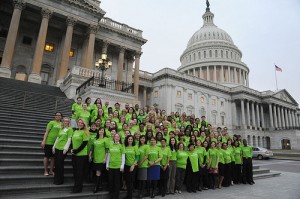 As a stay-at-home mom in the U.S. my daughters get me almost all year around the clock. As a member of the World Moms Blog community, I volunteered at least 10 days this year to the children of the mothers I share this planet with. It’s painful for me to leave my own children behind for a moment. It’s not a birthday for them either. But yet, I can’t see how we, as moms, cannot be doing what we can, given the overwhelming desperate statistics on child survival.

Just because we don’t see it, doesn’t mean that it is not happening.

And by the way, it’s just not Americans and moms who are championing these global vaccine initiatives.  Meet Mohammad Ismail, a 32-year old dad and polio survivor in Afghanistan. He lost both his legs to the disease when the vaccine wasn’t available in his country. He is jobless with three children, but he dedicates his time to educate his village on the importance of vaccinations. 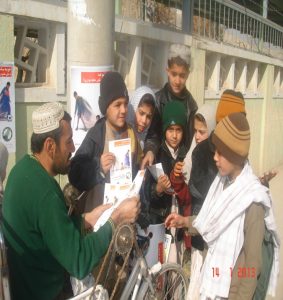 Mohammad does not want to see another child have to go through what he has gone through.  Commendable!
So, join World Moms Blog, Mohammad, over 400 Shot@Life Champions and over 190,000 people signed up in support of Shot@Life in standing up for the children on our planet without a voice, who are not getting the life-saving medicine that we can help make available for them to allow for their survival. With your help, we can all ensure a child’s Shot@Life.

The impact of vaccines on the lives of children around the world is incredible. Now, you can help sustain the impact by sending an email to your member of congress. Welcome your members to the 113th Congress and ask them to make sure that global health and vaccines are a priority in the new Congress. Take action and make an impact!

This story comes from the World Health Organization- Afghanistan and is part of Shot@Life’s ’28 Days of Impact’ Campaign. A follow up to Blogust to raise awareness for global vaccines and the work being done by Shot@Life and their partners to help give children around the world a shot at a healthy life. Each day in February, you can read another impactful story on global childhood vaccines. Tomorrow, don’t miss Tiany Davis’s post at Social Savvy Mom! Go to www.shotatlife.org/impact to learn more.

« Washington, DC, USA: Going Beyond the Fear
CANADA: Out With The Old… or Maybe Not »