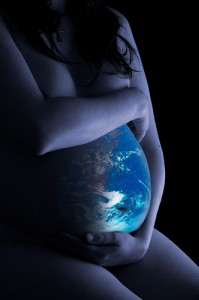 Today’s post is a continuation of a South American birth story from our contributor in Brazil, Eco Ziva.  Click here for first part of her story on World Moms Blog.

When our son brought my husband in I said I wasn’t going to get up and asked him to put some towels underneath me. I was determined to stay as still as possible in the fear-filled hope that the intense labor contractions wouldn’t begin. I continued breastfeeding our daughter in the exact same position. Even though nothing else happened besides what seemed like endless gushes of water, I felt more and more scared.

I wanted my husband to talk to the midwife and to the doctor because I didn’t feel like communicating with anyone. Nothing else mattered except staying still. I told my fear-altered self that if I stood still enough I wouldn’t actually go into labor and would simply be whisked off to the hospital for a simple and painless C-section.

Way deep inside me, a weak little voice tried to tell me things like “Remember what you prepared yourself for”, “You give birth so fast, your baby will be born in the car if you go to the hospital”, “You don’t want to get that awful epidural for no reason”, and so on.

The fear, however, spoke louder. I told my husband I was scared to death and wanted a C-section. I remember him talking patiently to me, although I recall nothing of what he said. I began imagining symptoms that could justify a need to go to the hospital. I was so nervous it was hard to put a phrase together; the words seemed to be jumbled up in my head. I finally called the midwife myself and – although I don’t really recall what I said – I either told her out straight how scared I was or she figured it out herself from whatever came out of my mouth.

Looking back, it was almost as if I was having a panic attack. After a while – fortunately – I was able to go between episodes of panic and moments when I prayed and used EFT, reiki and whatever other resources I could think of to calm myself down. At some point I fell into a deep sleep and had a complicated dream, where the baby – then an adult man – was talking angrily with me for a reason I don’t remember. I woke up with the feeling I had been in some sort of trance.

At another point I texted a message to a very special person ( I guess you could call her my holistic therapist), which said: “It started. Pray for me”. Soon after I got the response: “I certainly will! May it be a beautiful moment.  Surrender to Mother Mary and to God’s Holy Angels. God bless you! I will wait for news”.

Curious to know what happened next? Look out for part III of this story. As for now, please share your story with us below. How was fear present in your birth stories? How did you deal with it?