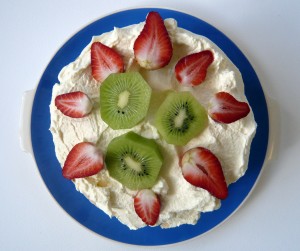 Pavlova is a New Zealand invention, whatever any random Australian may tell you, and as such it’s a dessert that tends to get trotted out whenever Kiwis have overseas visitors.

As I am the sort of Mum who thinks ice-cream in cones or pieces of fruit are perfectly adequate desserts, it was with more enthusiasm than skill that I recently decided to make a Pav for some international visitors.

This was a good plan. My Mum has an awesome recipe, which involves throwing all the ingredients into a bowl and mixing until done. I also remembered to put the eggs in the hot-water cupboard over night to ensure the meringue meringue-ed properly. I was feeling smug. I should never do that.

On the way home to make said Pav, I suddenly remembered that I had no proper mixer. We have a hand-held machine that moshes veggies, but that is all. I had some vague memories of my Dad mixing Pav with one of those old-fashioned hand-beaters and it seemed to take him hours. I figured it was OK, the held-held machine was electric after all, surely it wouldn’t too long.

Husband Craig shot out the door pretty quickly after the boys were in bed – he was off to do our laundry at his mother’s place due to the drought. The smallest boys were asleep soon after due to their smallness, and the oldest one was happily reading in bed. I had a pile of dishes to do, so thought I’d quickly mix the Pav and then get on to the dishes while it cooked.

Two hours later, I tasted the mixture to check I had put all the ingredients in. It tasted metallic. I tasted again, that couldn’t be right. It was. I washed the mixture down the drain and I called my Mother-in-law to ask if I could borrow her proper mixer. I wiped around a bit, put some more eggs into the hot water cupboard and went to bed. It seemed the best thing to do.

Craig brought the mixer home with him. The next day, I made the perfect Kiwi Pavlova and now here’s the recipe so you can make one too:

3 egg whites (warmed in the hot water cupboard over night)

Pinch of cream of tartar

Put all ingredients into a bowl (prefer ceramic or glass) and beat until it turns into stiff peaks. You should be able to hold the bowl upside down above your head and nothing come out.

Place on grease proof paper or a silicone mat on a baking tray. The taller the tower, the more crunch and meringue effect (my preference) – the flatter and wider the mixture on the tray, the more chewy the outcome.

Cook at 300F (150C) until slightly brown on the outside – about an hour to an hour and a half depending on your oven. Turn off the oven, BUT LEAVE THE PAV INSIDE until naturally cooled. It doesn’t matter how cracked the outside looks because you will disguise it.

Place on a fancy dish, cover the top in whipped cream and sliced kiwifruit or summer berries or sliced banana or what ever you fancy and serve.

Good luck and do tell: what cooking disasters have you had?

Karyn Van Der Zwet is a mother of three boys. She has had articles printed in the US parenting magazine: ‘Pathways to family wellness” and the journal of the British Association of Counselling and Psychotherapy – Children and Young People. She also writes for her own blog: http://kloppenmum.wordpress.com and can be found at http://facebook.com/kloppenmum. Her book “All About Tantrums” is due out in June this year.

Photo credit to NZatFrankfurt.  This photo has a creative commons attribute license.