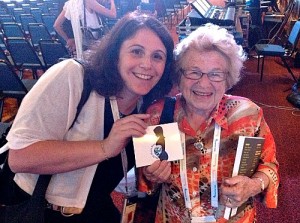 I don’t know why it is, but I have yet to come across any initiative, no matter how praiseworthy, that doesn’t have people criticizing some aspect of it. The Israeli Presidential Conference that I attended last week was no exception.

The conference, in its fifth year, is aptly titled “Facing Tomorrow.” Held under the auspices of 90 year old President Shimon Peres (may I have as much energy as him at that age), the conference saw 4500 people from around the world get together, inspire each other, and talk about topics facing us now and in the future. The conference was attended by world leaders, politicians, diplomats, international scholars, activists, poets, scientists, artists, clergy, entrepreneurs, economists and industrialists, as well as representatives of the next generation of leaders. There were plenary sessions, panels, roundtables and master classes that discussed a wide spectrum of topics with about 200 speakers representing some of the worlds brightest minds.

Internally in Israel there was quite a bit of backlash about the amount of money being spent on the conference at a time when tough budget cuts were just passed by the government. One particular sore point was the $500,000 fee being paid to former President Bill Clinton for speaking. In the end, because of the public outcry here in Israel, President Clinton donated the fee back to The Peres Academic Center.

While I understand the frustration many people feel about money being spent on something whose return can’t be tangibly measured, I see it a bit differently. If you want to be inspiring you need to be inspired. If you want to grow, you need to keep learning. If you want to make the world a smaller place, you need to network. If you want people to change their opinion of you, they need to meet you in person and preferably on your home turf. As former UK Prime Minister Tony Blair said: “The best short term politics pulls in the opposite direction of the best long term policy.”

An Israeli apolitical social start-up called Kinetis has been having quite a bit of success re-branding Israel doing just that. Their reason for bringing leading opinion leaders to Israel on a week long all expense paid visit: Global research shows that most people are acutely unaware of what life in Israel is really like, and consequently have no idea how relevant Israel can be to their lives. Bringing opinion leaders and makers to Israel and showing them what it has to offer in the field that most interests them fills this vacuum between perception and reality.

Be it bloggers, scientists, scholars, politicians, artists, researchers, business people, or just people on vacation, people who are exposed to Israel and the Israeli people for the first time are generally amazed by the warmth, hospitality, brain power and beauty they find here. During the conference Robert DeNiro said:

“I always enjoy coming to Israel. Israelis are warm, they’re energetic people. Forthright. Very smart. I always like smart people. They’re nice people, you know. Aggressive, and I respect that aggressiveness because you need it in their situation.”

“The real reason Israel gets better by the day, by the hour, is the people.”

“In Israel a friend is a friend.”  said Publicis CEO Maurice Lévy.

This year’s Israeli Presidential Conference had such a variety of amazing and inspirational speakers and guests and the sincere praise that was heaped on Israel by the foreign attendees is a commodity that Israel can’t measure. Aside from the actual PR during the conference, anyone who comes to Israel and is impressed with the country and its people, goes back home with a different view on the country, and its that change that is Israel’s biggest asset.

The conference in my opinion is also more than just changing world opinion about Israel and its people. It’s more than just showing the world that Israel has great things to offer in many fields. It’s also about inspiring the people living here. People need a boost of inspiration by others who have done great things and/or who have overcome great odds.  I was exposed to people I had never heard of who are leaders in their field, I was inspired by their nuggets of wisdom but mostly their by their drive and attitude. If I were to list all the people who were there and all the wisdom I came away with, it would take many hours to read.

As a woman one of the things that resonated with me was the way Marvell CEO, Weili Dai, one of the world’s leading female entrepreneurs, spoke about her co-founder/husband and her belief that our husbands’ successes are our successes.  She also made it a point to note that a Jewish mother and a Chinese mother are the same. The famous sexologist Dr. Ruth was not only a really humorous speaker with deeply ingrained beliefs about monogamy, love and holding hands, but she was also right on the money when she said “the word friend has to be earned.” Economic researcher and authot Dan Arieli backed this up when he asked the audience “How many of your facebook friends would you bail out of jail?”

Conferences such as these are also a way to meet people you may never have met otherwise. I met people from Israel and from abroad and had many interesting and meaningful conversations. One group that I met who left me with extraordinary hope for what the future will bring was a group of 16 year olds from Chicago. I don’t remember being that open, talkative and bright when I was sixteen. I was also fortunate to be able to interview the top selling Israeli singer Rita who was so down to earth and made me feel at ease.

Until you put yourself out there you never know who is out there waiting for you to meet.

All in all, I really enjoyed the conference. My one big criticism was that is was the Israeli Presidential Conference, and there was not a single Israeli flag in evidence.

One last thought: As Cisco CEO John Chambers said, ” If Israel rests on its laurels it will be left behind.” I think the same is true with us as people. We constantly have to learn, grow and meet new people. If we don’t continually push ourselves forward, we too will be left behind.

What do you think about conferences that cost a lot of money to produce? Do you think they are worth the investment? What inspires you and keeps you thinking and moving forward?

This has been an original post to World Moms Blog by Susie Newday of Israel. You can find her positive thoughts on her blog, New Day New Lesson.

« SOCIAL GOOD: 3 Steps to Changing the World by a Playground Aficiando
LAOS: Casting A Wider Net »