We announced our new campaign at BlogHer Chicago at the BlogHer International Activists Panel! Join us for our monthly twitter parties with hashtag #Moms4MDGs to keep the conversation flowing about the Millennium Development Goals (MDGs)! Back in April our Senior Editor, Purnima Ramakrishnan asked, “What if we keep writing about the MDGs?”, just after two rounds of twitter parties that we hosted for the Momentum 1000 campaign last April. The campaign made a lot of noise for good, while reminding the world there were only 1000 days left until the 2015 deadlines for the UN’s Millennium Development Goals (MDGs). Purnima’s question led to more brainstorming, and here’s what we we launched in July:

An Exciting All Volunteer, 8 Month

Well, every month, for 8 months (1 per the 8 MDGs), one of our World Moms will answer the question, “Why is (the month’s MDG) important to me as a mother?”

Her post will be hosted by an organization’s web site that is working relentlessly, year-round toward that particular MDG. For example, our first post ran on August 13th on the ONE Campaign’s site by our editor, Nicole Melancon, for MDG 1, to eradicate extreme poverty.

How Can You Help Save the World?

This project brings awareness to the MDGs and showcases an organization working toward an MDG goal per month. By sharing the post of the month, writing your own post about the campaign, joining the monthly twitter parties or carrying out each month’s action items when possible, together, we can make a difference! 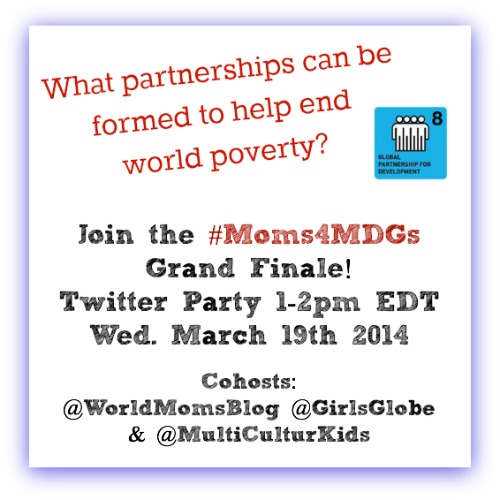 And when the World Moms get together to chat…it’s always fun!

The next twitter party will take place on Wednesday, March 19th from 1-2pm EST on MDG, forming global partnerships for development! The hashtag is #Moms4MDGs, and we encourage all moms around the world to join in the discussion! We are lucky, again, to go out with a bang with cohosts, Girls Globe and Multicultural Kid Blogs!

Haven’t been to a twitter party? You can do something as simple as tweet what the MDG of the month is, ask questions, share ideas and meet other people interested in the same global issues. What a great reason to join and to socialize with our World Moms! How to come to the party: You can search for the hashtag (#Moms4MDGs) to join in on twitter from your phone, or if you’re at your computer, go to www.tweetchat.com and enter the #Moms4MDGs hashtag to follow and participate in the thread! Don’t forget to use the hashtag #Moms4MDGs. (We are not being paid by any organization to work on this campaign. This service is part of our mission statement stated at the bottom of our site.)

1) WE KICKED OFF MDG1! –> AUGUST 2013: MDG1, To Eradicate Extreme Poverty at ONE.org with World Mom, Nicole Melancon of thirdeyemom to post on August 13th, plus a twitter party on Wednesday, August 14th 9-10pm EST! —>

READ: MDG1 POST by Nicole Melancon at the ONE Campaign!

2) 57 MILLION CHILDREN WITH NO ACCESS TO PRIMARY EDUCATION –>:SEPTEMBER 2013: MDG2, Achieve Universal Primary Education with World Mom, Martine deLuna at Save the Children.

READ: MDG2 POST by Martine deLuna at SAVE THE CHILDREN!

3) OCTOBER 2013: MDG3, Promote Gender Equality and Empower Women. Girl Up and Plan International in the USA stepped in to cohost our Twitter Parties!  This month’s post was by World Mom, Mama B, in Saudia Arabia on her volunteerism with Al-Nahda.

READ: MDG3 POST by Mama B. at World Moms Blog!

READ: MDG5 POST by Dee Harlow in Laos on the Every Mother Counts Web Site!

6) Combat HIV/AIDS, Malaria and Other Diseases.  Meet us at the Bill & Melinda Gates Foundation with World Mom Erin Threlfall!

READ: MDG6 POST by Erin Thelfall on malaria on the Impatent Optimists blog!

« Massachussets, USA: Traveling Like a European
ISRAEL: Interview With Rita: Using Music As A Conduit For Peace »