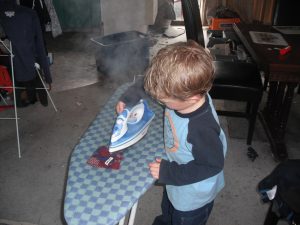 When my boys were learning to roll over, I never stopped them from bumping their heads on the floor. We had carpet, vinyl and tiles, and they had access to all of those surfaces and often rolled from one to another. By the end of the first week there had been a few bangs and tears, but nothing that couldn’t be sorted with a cuddle and rock in my arms – and they had all learned to lift their heads up as they rolled.

I didn’t really think about this approach much but assigned it to other events as they grew. I did things like: holding my hand over the corner of a table when they toddled by; casually pointing out the floor was wet after I had mopped it; physically turning them around as they crawled down our concrete steps, so they could get down backwards; making sure they had one bed they could bounce on; and showing them how to get out of the trees they had climbed. As a result by the age of four they could all do things like; cut food and sticks using sharp knives, get themselves out of tight spots, and use a battery-drill and an iron without hurting themselves. By then they knew the difference between tools and toys.

I never pushed them or even encouraged them to do these things; I just (mostly) allowed them to as they were inclined to, taught them a few tricks, and turned up with plasters and cuddles when things didn’t go according to plan.

I have come to accept that children are driven to seek a certain amount of danger and I have found the more I have allowed my boys to set the pace of their ‘dangerous’ behaviours the more self-assured and capable they have become, and more aware of the risks NOT to take.

They occasionally have bitten off more than they could chew (when four years old, our eldest decided to ride around our block alone on his bike, he didn’t want to do that again for another two years) but most often than not they have taken small steps, fast. I often see children who have not been allowed to take the same small steps and they seem, to me, to be either too timid to take any chances or they over estimate their abilities to truly dangerous levels.

There seem to be two strong opposing forces in New Zealand parenting at the moment. One in which ‘safety first’ is the catch phrase, and the other which emphasises the importance of children being allowed to take measured risks. It seems I’ve ended up on one side of this debate without even trying, but now am really pleased that I have taken the approach I have taken.

What’s the approach to danger in your house? Do you think children need to be kept safe or that they need to learn to manage danger?

This is an original post to World Moms Blog from our writer in New Zealand, Karyn Van Der Zwet

The photograph used in this post is credited to the author.

« NEW YORK, USA: Time away from it all
SOCIAL GOOD: Women on a Mission to Reach Higher Ground »