“The world has stood and watched as the children of Syria have been shot, shelled and traumatized by the horror of war. The conflict has already left thousands of children dead, and is now threatening their means of staying alive.

We understand there is a political debate over what to do next in Syria, but we believe everyone can agree on the critical need for safe humanitarian access across the entire country. There is no room for delay or argument: Syria’s children must not be allowed to go hungry.”

-Roger Hearn, Save the Children’s regional director for the Middle East. 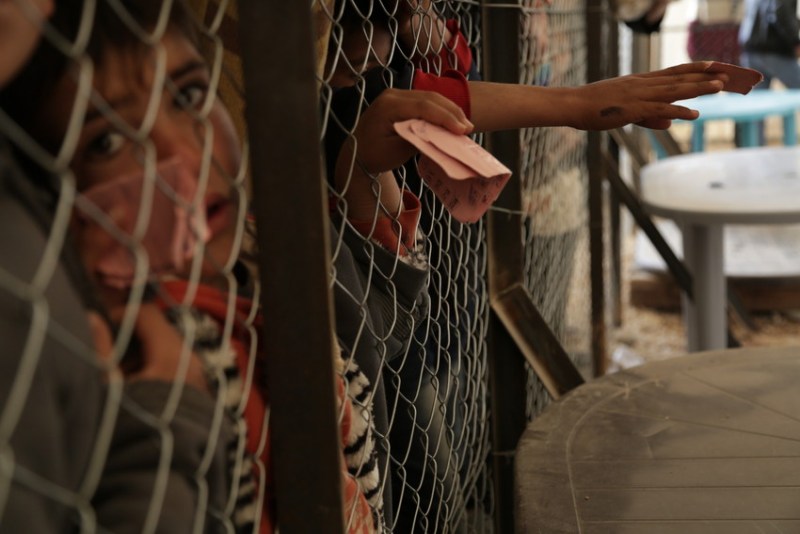 A couple weeks ago World Mom’s Bloggers Jennifer Burden, Elizabeth Atalay, Nicole Morgan and myself attended an intimate panel hosted by Save the Children, ONE and the Bill and Melinda Gates Foundation during the 2013 Social Good Summit in New York City. It was a rare opportunity to hear some of the top social advocates and leaders speak about some of the pressing developments in social good involving eliminating extreme poverty, using technology for activism, and the current crisis in Syria.

One of the most touching conversations at the roundtable that day was listening to the President and CEO of Save the Children Carolyn Miles discuss the growing crisis in Syria and its tragic impact on its children. A week after returning from New York, I am still reflecting hard on these children and wondering how on earth I can help spread the word and raise awareness of their plight. 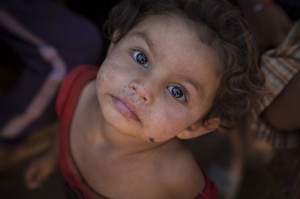 Rami*, two, at her home in a tented refugee settlement in Lebanon, near the Syrian border. *All names have been changed to protect identities. Photo Credit: Jonathan Hyams/Save the Children

The war in Syria is one of the largest humanitarian crisis of our time and sadly Syria’s most vulnerable citizens, its children, are paying the price.

On September 23rd, coinciding with the gathering of global leaders at the UN General Assembly in New York for UN Week, Save the Children released a startling report titled “Hunger in a War Zone: The Growing Crisis Behind the Syria Conflict“. I read the report and could not put it down. The images of Syria’s children still haunt me and I had to do something to spread the word about what is going on and how we can help.

Here is a summary of the key findings of the report. All information below as well as images being used with permission from Save the Children. To read the report in full, click here. 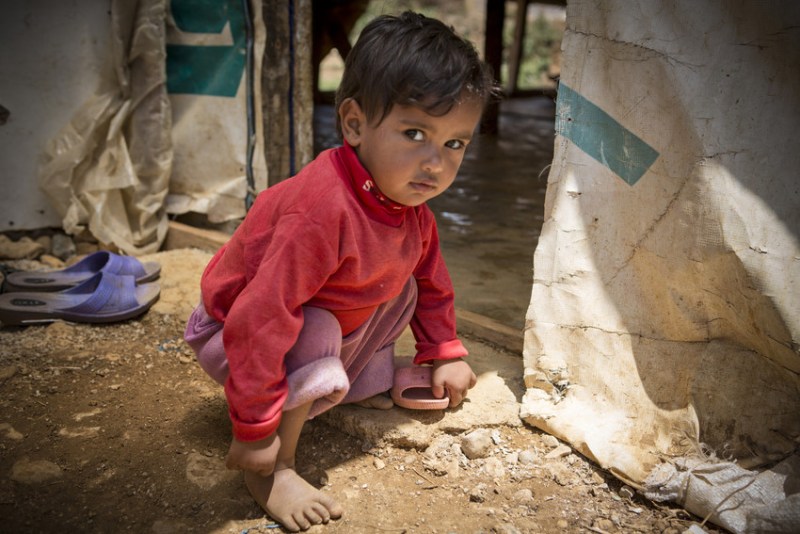 Zeina *, two, at her home in a tented refugee settlement in Lebanon, near the Syrian border. Zeina and her family are living in a small tent on the Syrian border. The father, Ahmad, has been part of Save the Children as Cash for Work programme, and used the money on food and water for the whole family. Thousands of children and their families continue to stream into neighbouring countries. Most of those who have escaped are living in makeshift shelters, unsuitable buildings or in overcrowded camps, amid growing shortages of food, medicine and water. * Names have been changed to protect identities. Photo Credit: Jonathan Hyams/Save the Children

Pictures tell a story. They show the world the people who are really suffering in Syria. Its most innocent and vulnerable: Their children.

This is the photo that struck a chord in my heart. She could be my own daughter. Same age. Same love for stuffed animals. But no smile to greet the day. 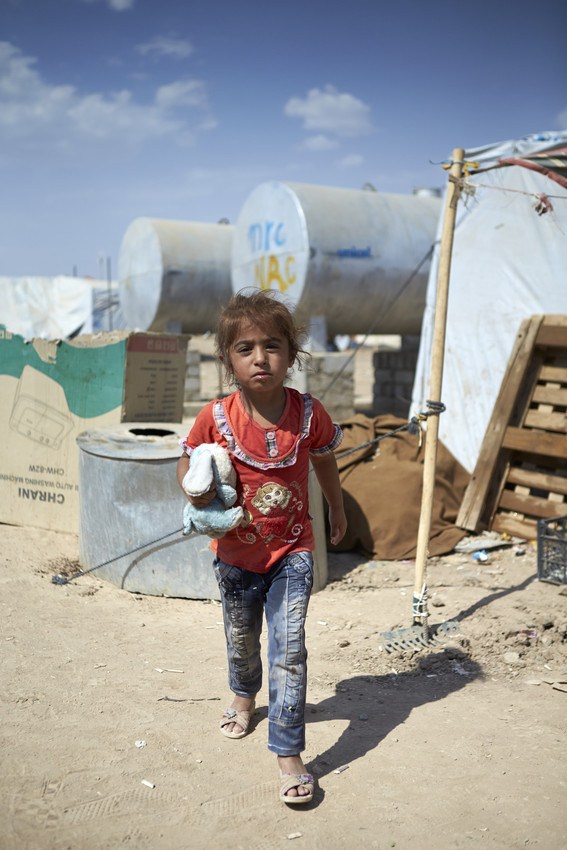 Refugee child in Iraq. Most of the refugees did not manage to bring any belongings with them when they fled Syria. Some children managed to save their favourite teddy bear or doll. Others have received new toys after moving to the camp. Photo Credit: Rob Holden/Save the Children

It is hard to look at these photographs and not feel some inherent urge to jump on a plane and save them. As a mother of two children, ages 6 and 8, I cannot even begin to imagine what it must be like for these parents and their children.

In mid-September, it was estimated that there are over 4 million displaced families living inside of Syria’s borders in temporary housing with little access to food to feed their children and barely a drip of water. Another two million have fled the country pouring into neighboring countries such as Jordan, Lebanon, Turkey, Iraq, and Egypt at a rate of nearly 6,000 day*.

Some families are living in abandoned industrial buildings while others in makeshift refuge camps. The World Health Organization has deemed the crisis in Syria “to be one of the worst ongoing humanitarian crisis on earth”. As the sun begins to turn cold and food becomes more and more scarce, what will these families feed their growing, hungry children? 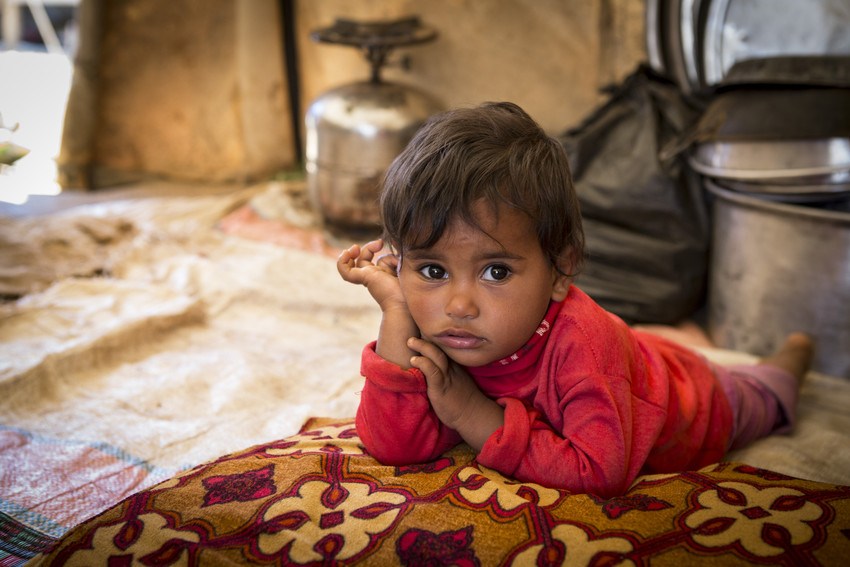 Zeina *, two, at her home in a tented refugee settlement in Lebanon, near the Syrian border. *Names have been changed to protect identities. Photo credit: Jonathan Hyams/Save the Children

Per Save the Children, “More than four million Syrians — more than two million of them children — are unable to produce or buy enough food, with many thousands living under fire and with no access to all but the bare minimum foodstuffs needed to survive. Save the Children is already seeing reports that one in 20 children in rural Damascus is severely malnourished”.**

One of the biggest issues right now is the fact that most of Syria’s families are trapped in dangerous locations where they have little or no access to food. They are faced with making the unimaginable decision. To stay inside their homes and starve or to face bullets and death by leaving the safety of their homes to get food for their family. It is a choice no parent should have to make.

“A message to the World”

“This is a message from the Syrian people to world leaders. I am 13 years old and I am Syrian. I am Ali. I want to talk about the tragedy that we have in Syria. In Syria, we have no good food and not enough water. We only have lentils. So we ate lentils every day. We would see wounded people and dead bodies every day in the street, and many children who did not have homes. They are living in schools. But now they don’t even have a school to live in. I am asking the leaders of the world to provide us safe shelter, food, water, medicine – this is all we ask. Please, please, please – help us”. 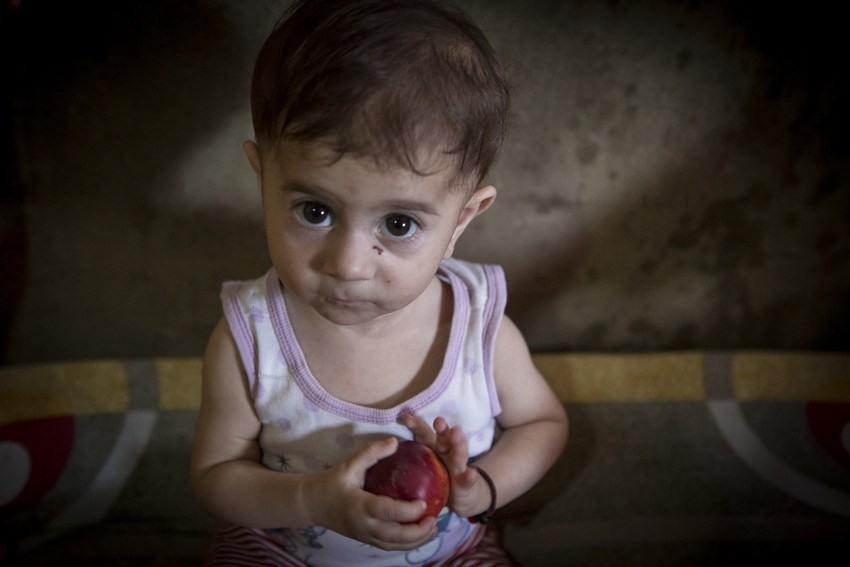 Maya * 11 months, at her home in a disused industrial building in Lebanon near the Syrian border *All names have been changed to protect identities. Photo credit: Jonathan Hyams/Save the Children

Another issue is that the war has destroyed Syria’s economy pulling a once relatively prosperous country into shambles. The United Nations “now estimates close to seven million inhabitants have been plunged into poverty since fighting began. In addition, Syria’s agriculture and infrastructure are collapsing, with grain production falling to less than half of what was typical before the war”**. Furthermore, “after two and a half years of war, the conflict has set Syria back 35 years and imposted an economic cost of more than $84 billion, equivalent to over 140 % of Syria’s pre-war GDP”. *** Once the war ends, rebuilding is going to be a long and painful journey. 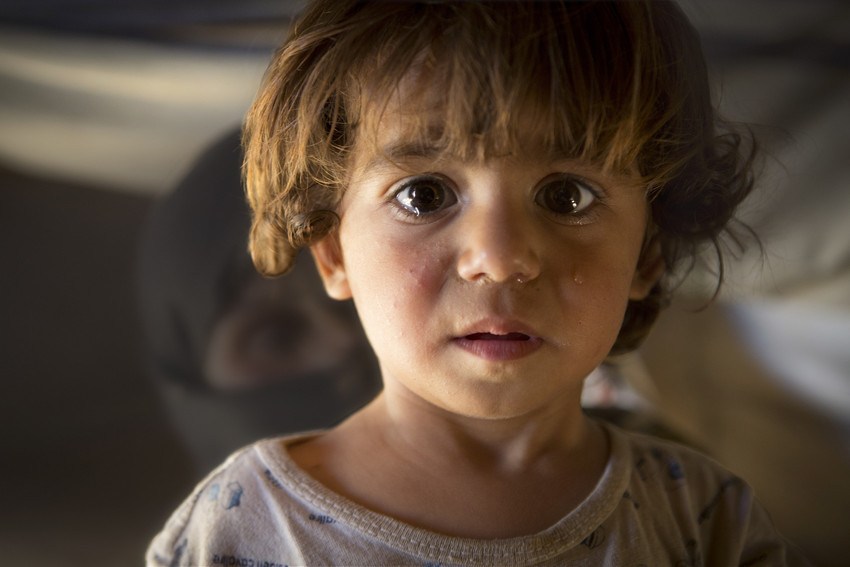 Nadia *, one and a half, is carried by her mother Roula * outside their home in a tented refugee settlement in Lebanon, near the Syrian border. *Names have been changed to protect identities. Photo Credit: Jonathan Hyams/Save the Children

What Save the Children is asking world leaders is to secure humanitarian access to the people per Save the Children’s Carolyn Miles. There are 7 million people in need of assistance and 5 million people stuck inside the country. Save the Children strongly believes that regardless of the political situation in Syria, we must do something about this enormous humanitarian crisis. We must act and we must act now. Time is running out for the millions of children and families who are suffering and facing extreme hunger and malnutrition. The world must listen and help.

Here is the latest response by global leaders: Press Release 10/02/13 Save the Children “UN Aid Access Agreement Could Save Thousands of Lives in Syria”.

The fight to save Syria’s children is far from over. We need to act now and spread the word. We need to voice our concern.

This is what is at stake: Children. 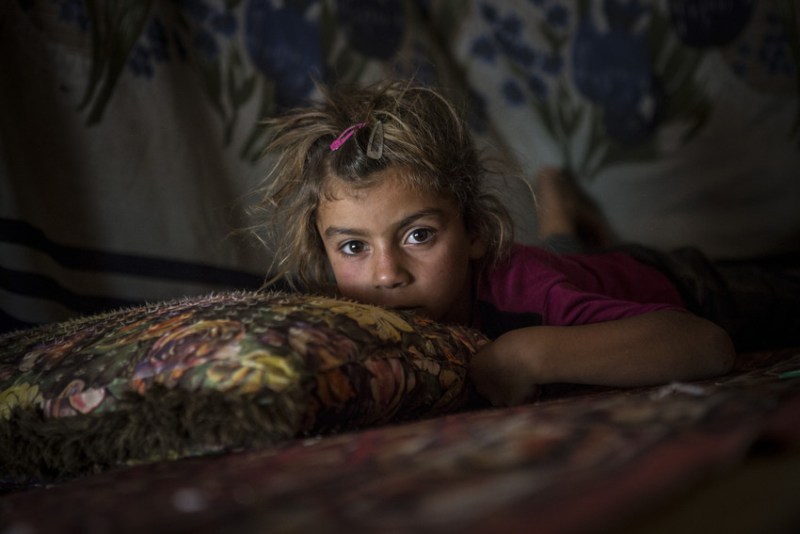 Suhad * six, lies on the floor of her home in a tented refugee settlement in Lebanon, near the Syrian border. *Names have been changed to protect children’s identities. Jonathan Hyams/Save the Children

*“Six Million Displaced by War in Syria” via the Atlantic

***Hunger in a War Zone: The Growing Crisis Behind the Syria Conflict“

Highlights from the 2013 Social Good Summit

To keep in touch with the latest updates on Save the Children’s work in Syria and how you can help, click here.

How can the world sit by and watch these children suffer?

This post was written and modified for World Moms Blog by Nicole Melancon who can also be found at ThirdEyeMom.