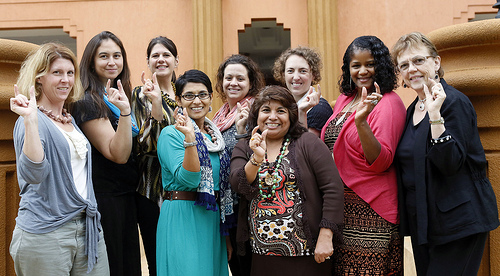 A UN Foundation Shot@Life delegation to Uganda, including World Moms, Jennifer Burden and LaShaun Martin, shows we are “this close” to eradicating polio worldwide. — October 2012

According to the U.S. Center for Disease Control,

“The eradication of polio from the western hemisphere is among the most significant public health achievements of all time, but victory over polio cannot be claimed until the entire world is made safe from the disease, and that is the commitment the global public health community has made.”

“Polio is a crippling and potentially deadly infectious disease caused by a virus that spreads from person to person invading the brain and spinal cord and causing paralysis.” — US CDC

Is there a cure for polio?

“Because polio has no cure, vaccination is the best way to protect yourself and the only way to stop the disease from spreading. The spread of polio has never stopped in Afghanistan, Nigeria and Pakistan. Poliovirus has been reintroduced and continues to spread in Chad and Horn of Africa after the spread of the virus was previously stopped.

In the late 1940s to the early 1950s, in the United States alone, polio crippled around 35,000 people each year making it one of the most feared diseases of the twentieth century. By 1979 the country became polio free.” — US CDC

The protection of the global population, especially children, from such horrid diseases motivates our volunteerism with the UN Foundation’s Shot@Life campaign and the GAVI Alliance.  Shot@Life rallies Americans in support of life-saving vaccines for children in the developing world, and sends monetary support organizations on the ground administering the vaccines, such as the GAVI Alliance.

“These diseases are only a plane ride away.” — Dr. Meg Fisher  of American Academy of Pediatrics

What Can You Do to Help?

Join World Moms Blog in our movement to help protect the children who need it most, and help eradicate diseases, such as polio.

1) Donate to Shot@Life.  Did you know $20 fully vaccinates a child from the 4 leading causes of death of children under 5 years old — polio, measles, rotavirus and pneumonia? And only $1 pays for a polio vaccination.

2) Throw a GAVI Global Tea Party to raise awareness. Did you know you can use these tips from the World Moms about how to have interesting discussions with your friends and family on one of the leading global health solutions?

3) Join the #endpolionow Twitter Party tonight at 8pm-9pm EST tonight, Thursday, October 24th. Shot@Life Champions are taking to twitter tonight in support of polio eradication, and we’ll be there, too, making some noise!

4) Share this post and read our posts on our journey with Shot@Life to Uganda.  There, we observed UNICEF’s Family Health Days, which administer life-saving vaccines to children under 5 years old.

Do all 4, do 1 — whatever you can do. Help us help children and help eradicate polio worldwide!

This is an original post by World Mom, Jennifer Burden.

Photo credit to Stuart Ramson of the UN Foundation.