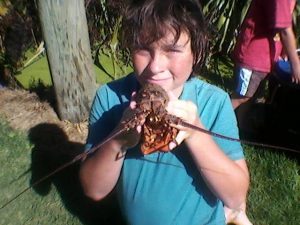 One of my enduring memories of childhood is of trapsing over paddocks, up and down hills, in gumboots too big for my feet picking mushrooms or blackberries. Eventually getting sore heels and aching legs. Eventually filling buckets and ice-cream containers with food.

Probably scrapping with my sisters. Probably moaning about having to do so. Definitely covered in blackberry juice and scratches on blackberry days. Definitely not impressed by having to pick mushrooms, which I didn’t like to eat.

Tuatua (too-ah-too-ah) are a shellfish. The children love to collect them. We go out at almost low-tide or just after low-tide in thigh-high water. We do the Twist. Our feet sink into the wet sand and feel around for something hard. When we find one, we reach down and pick it up with our hands.

Sometimes, we are side-swiped by a wave. Sometimes, we pick up a round hard sea-biscuit instead. At times, instead of the Tuatua-Twist there is a Crab-Bite-Leap with occasional bad-language. There is almost always laughter and a competition to see who can find the most. This year, the boys and their cousins also took responsibility for collecting fresh seawater twice a day, to keep the Tuatuas in, while they spat out all the sand inside their shells. They kept them cool in the fridge and, when they were finally cooked, the children ate them: some with gusto, others not so much. To me, they taste a bit like chewy seawater…

Our eldest son, 12 year-old Joe, with his 13 year-old girl cousin, Billie, trapped their own crayfish.

Crayfish are related to rock-lobster and, in our extended family, are usually trapped off-shore and by boat, or dived for with scuba-gear and tanks. Joe and Billie had kayaked out around a small peninsula and discovered an old craypot on the rocks. They dragged it out of the sea and managed to convince their fathers to repair it. They then kayaked it out again and dropped it on a good rocky spot.

Each day they went out to check their pot, just as the adults do the other craypots. The first day they caught – seawater. The second day they caught – seawater. The third day they were a bit fed up and otherwise occupied, so didn’t go out. The fourth day or maybe it was the fifth, Billie was out fishing and Joe went out alone to see what was there and to bring the pot in for good. He was very excited to discover they had caught a legal-sized cray! Yes, duly cooked and eaten.

In these days where many children don’t know that carrots grow in the ground or that their meat comes from a real animal, I love that our boys are sometimes involved in the process of food-collection and the processes of preparing it for a meal. I know that these are the Good Old Days and these moments will create some of their childhood memories.

Do your children do similar things you did as a child? Are they involved in collecting or harvesting their own food?

This is an original post to World Moms Blog from our writer in New Zealand and mum of three boys, Karyn Van Der Zwet.

The image used in this post is credited to the author.