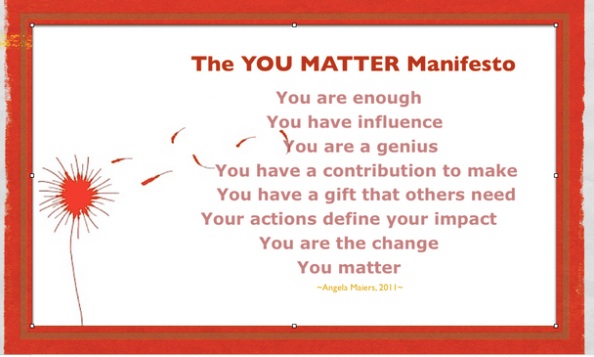 “You Matter”. The revelation that those two words can change the world seems so simple, so intuitive, yet those are not words that young people are used to hearing. Angela Maiers a long time educator, and founder of Choose2Matter decided that those two little words could be revolutionary.  With her passion and enthusiasm behind the idea that we each have a unique genius to contribute, it is no wonder that her 2007 TEDx talk went viral. Thus the Choose2Matter movement was born.

“We were created for significance and one of the most dangerous things that can happen to us is the feeling that we don’t matter.”- Angela Maiers

Angela points out that she is not talking about an ego thing, studies show that feeling like you matter is a basic human need. The genius she sees in all of us is each individuals’ ability to problem solve from their own unique personal perspective.  What started out as a digital community has now evolved into Choose2Matter Live events at schools across the U.S.A. In my mind perhaps no one needs to hear this more than high school kids who are in the process of self-discovery, so I was thrilled when the two-day Choose2Matter Live workshop came to my daughter’s public high school in Rhode Island.

The first thing the kids learned was the Choose2Matter Manifesto: You are enough, you have influence, you are a genius, you have a contribution to make, you have a gift that others need, your actions define our impact, you are the change, you matter.  If they did not believe it before, they were now introduced to the idea that their voices and their actions can help others. The examples shown to this new group of kids of ways in which students have already made an impact through Choose2Matter are remarkable.

Honestly though, who doesn’t need to hear this manifesto? Even as adults the feeling that we matter is essential.  This is an ideology that we frequently see first hand here at World Moms Blog, the power of one person, one idea brought to fruition, and how it can positively impact entire communities. Kristyn Zalota launched CleanBirth.org  to provide safe birth for mothers in Laos, Alison Fraser started  www.mom2momafrica to support the education of women and girls in Tanzania, and the founder of World Moms Blog Jennifer Burden created this global community of mothers from around the world when she couldn’t find what she was searching for online. These are just three examples of the many ways World moms Blog Contributors and Editors are using their passions and voices to make the world a better place. Their accomplishments inspire me to strive to do more in my own life, through their achievements I can see the possibilities when one puts their mind to solving a problem. 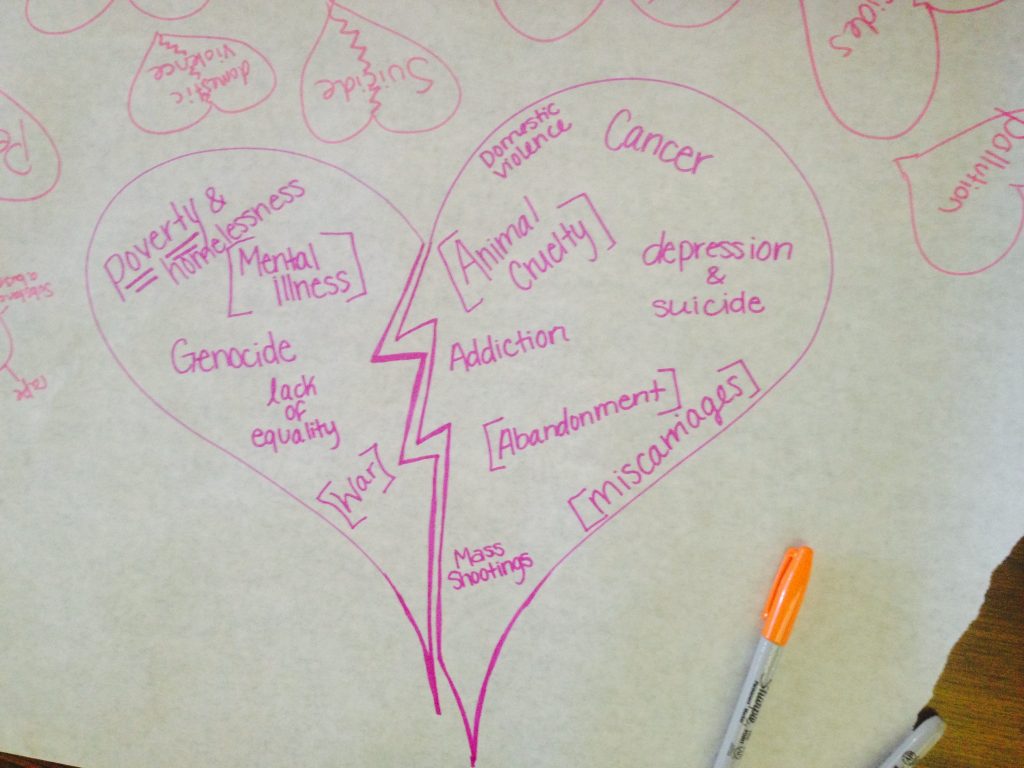 After the introduction, when the kids broke out into groups of “heart-break mapping” to narrow down what breaks their hearts about the world, and then come up with solutions of what they can do about it, my heart burst open. Kids narrowed down their heart breaks into solvable problems, some chose to be brave about sensitive issues they knew first hand to use their experience to try to help others. Due to a snow-day a room full of high school kids chose to voluntarily return to school on the saturday before vacation week to follow through on their ideas.  It was truly amazing to watch these kids come together and talk through some of the major issues impacting society. I witnessed at least three new websites being born to begin to address some of their heart breaks , self-harm, depression, and body image issues for girls. These kids got it. As Angela and her colleague Mark told the kids, these ideas may not be the ones to solve a problem, but you are just building your muscles here, you are just getting started.

The lessons the kids at my daughter’s high school learned in those two days are sure to stay with them. The empowerment of knowing that they do matter, that they are capable of making a difference is huge. The students were left with the message that they are the ones who will need to come up with the answers to the world’s most pressing problems, because us adults just may not have all the answers. (But that is one thing I think all teenagers already seem know.)

This is an original post written for World Moms Blog by Elizabeth Atalay of Documama.

Do you have any great examples of the power of one person who made an impact to share?