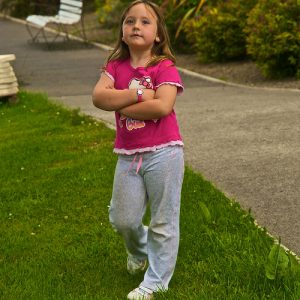 From almost the moment our daughter came onto the scene eight years ago, we knew she had a strong personality. She was one of those incredibly alert and determined babies; the type you could tell was processing her surroundings and trying to figure out what to do about them.

While many babies and toddlers her age were delighted to be pushed in a swing, my daughter would have nothing to do with swings until she was old enough to figure out what made them go. She had no desire to be the passive recipient of being pushed, instead she wanted to be in control; she wanted to conquer it. She took the same approach with toys, puzzles and games. She was an early walker, a determined eater, and an all-around intense little thing.

My husband and I frequently got comments like: “boy, you’ve got your hands full with that one,” or “she’s going to keep you on your toes.”

As our daughter grew, by far her favorite activities involved sorting, organizing and problem solving. I have one vivid memory of her toddler music class, when she was just two years old. About three-quarters of the way through the class, the teacher put out a basket of instruments for the children to choose from and play along with. Our daughter, who was particularly fond of the little plastic eggs filled with beans—which she called shake-a’s—was determined to collect as many of them as possible. Driven by this singular motive, she went around the room delivering alternate instruments to fellow toddlers and parents alike. Anytime she encountered an individual who already had a shake-a, she’d attempt to persuade them with an alternate instrument in exchange until she had gathered a significant cache.

During these displays of self-assured behavior and go-get-‘em spirit, I often found myself shrinking into the background, hoping other parents wouldn’t fault me for having such a pushy, precocious child. At this particular music class, however, a parent approached me afterwards and commended me for having such a “strong child with clear leadership potential.” With her few words of encouragement, this parent liberated me from my deep mommy guilt about having a child with drive.

I was in constant conflict because, even though I am a child of the 70’s—a time when many of our mothers here in the US were breaking down stereotypes and entering the workforce en masse—I was raised by my father, who came from an old-world upbringing and had old-fashioned views of how boys and girls should behave.

I am reluctant to admit that, rather than celebrating my daughter’s inherent leadership qualities, I labeled her as “bossy” and occasionally even criticized her for being too demonstrative.

Bossy, a word inferring that someone is behaving “boss-like,” should be a compliment heralding someone’s leadership skills but ironically, instead it criticizes her for it. It’s a label reserved primarily for girls. You rarely hear it applied to boys. A little girl on the playground, organizing kids into teams and assigning them roles will quickly be knocked down a few rungs by calling her “bossy,”  whereas a little boy taking the same actions might be respected and followed.

I’m ashamed to admit, even I supported this stereotype. I was concerned my daughter was too confident interacting with adults, leading activities and organizing groups. I was concerned she wasn’t “girly” enough, lacked empathy and a gentle, nurturing-side. As a modern, liberated and independent woman myself, I still didn’t want her peers to ostracize her or put her down.

Why was I struggling between nurturing and diminishing my daughter’s inner boss? Why was I uncomfortable with her being a leader, or overly-confident or intensely goal oriented? What could I do to help raise this new generation of girl-leaders?

Two weeks ago I got some reassuring answers. They were in the Wall Street Journal, on a full-page, front-of-section article titled, “Don’t Call Us Bossy.” And the women giving the encouragement were the Chief Operating Officer of Facebook, Sheryl Sandberg, and the Chief Executive Officer of Girl Scouts, USA, Anna Maria Chavez.

Sandberg and Chavez’s goal is to redirect our thinking about the way girls lead. To relabel our vocabulary about girls’ take-charge behavior. Instead of bossy behavior, recognize it as executive leadership potential, like CBS television anchor, Norah O’Donnell does. Instead of discouraging ambitious goals, support girls to recognize their inherent ability to achieve whatever goal they set out for.

I think the world would be a very different—and frankly far more pleasant—place to live in if there were more “bossy” women in charge.

Let’s take a stand to have more female bosses in the workplace; Here’s to raising our girls to be the leaders they are capable of being, not the followers our lexicon makes them feel they are supposed to be!

Did anyone ever call you “bossy” growing up? Do you see these qualities in your own child? How do you feel about assertive and confident girls?

For ways to encourage leadership in girls, visit LeanIn.org and BanBossy two of the movements supported by Sheryl Sandberg, Ana Maria Chavez and Girl Scouts, USA.

This is an original post to World Moms Blog from our managing editor and mother of two, Kyla P’an.

The image used in this post is credited to Pat Moore. It holds a Flickr Creative Commons attribution license.