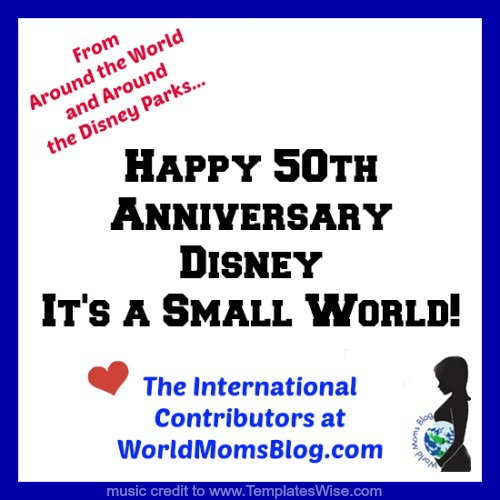 There’s a Bigger World Out There

When I was a toddler back in the 1970s, my favorite toy was a wind up pocket radio box that played “It’s a Small World”.  As the music played, it turned the little children from all around the world dressed in different clothing past my eyes.  I remember, as I grew, constantly asking my parents, “Where is this girl from?” and “Where is this boy from?”, while pointing to the toy.  My mother even saved the radio for my own kids to play with.

Fast forward 30-something years later, and here I am, learning everyday on the topics of motherhood, culture, human rights and social good from the women around the world who write for World Moms Blog.  I am lucky to be raising my children virtually with Tinne in Belgium, Susan Koh in Singapore, Tara B. in the USA, Nancy in Tanzania, Deborah Quinn in the UAE…and the list goes on!

And that little Disney radio box was one of my first indications that there was a greater world outside of my own suburban NJ neighborhood.

This past weekend I had my bags packed to head to the Disney Social Media Moms Conference, this year in Disneyland in California.  What luck that it was going to be during the 50th Anniversary of Disney’s It’s a Small World! I excitedly checked into my flight…only having to call the airline and uncheck myself from my flight hours later because my kids, and at the very last-minute, my husband, fell sick. Taking care of the family is what, us, parents do, right? So, how to turn lemons into lemonade?  We asked the World Moms  Blog Contributors to send a photo in to be part of a special slide show where our site could commemorate Disney’s It’s a Small World 50th Anniversary.  On such short notice, take a look at what we came up with…I can’t stop watching it!!

And, if you’re a regular here, you know how much we love UNICEF when we chose them as our beneficiary for our Live Below the Line campaign. I’ve also traveled to Uganda to observe UNICEF’s programs on the ground firsthand with the UN Foundation’s Shot@Life campaign.  It makes me happy to know that Disney has pledged to donate $150,000 to UNICEF to commemorate the 50th Anniversary of It’s a Small World.  You can join in, too. Build your own doll or record yourself at SmallWorld50.com, and for every doll, one dollar will be donated to UNICEF by Disney. This is an original post to World Moms Blog by Jennifer Burden of New Jersey, USA.

« NEW ZEALAND: Boys Nurture, Too
SOCIAL GOOD: My Struggle Between being a Mommy and a Mama »