In the U.S., I find myself sometimes avoiding conflict in social situations. My kids…well, not so much…

“She is writing on the kitchen table!”, while my girls battle for a crayon. Or…

“If you knock over my blocks, I’m telling!”, while just seconds later, my little one knocks the blocks with a cheeky grin. Or…

This is the reality now with a 7 and 3 year old, but I’m predicting that when they’re teenagers that they will rebel in the same way I did. Fight with their parents for a later curfew. Disagree with their mom because they want to wear a strapless dress to the eighth grade dance. Insist that they’re dating whoever they want. I hope their outspoken fire to challenge society will grow into and beyond their teenage years. I didn’t say that I am prepared for it, but I can accept that it is coming…I think.

But, as adults, it seems many of us tend to harden and lose that fire over time. The fire that ignited our teenage passions to think in a different way. The fire that kept us learning to support our own stance, for what is right. Going with the flow just feels more comfortable sometimes, especially when big odds are not at stake.

But, at the World Bank and IMF Civil Society meetings last week, big odds — which impact the lives of the world’s people and often the most vulnerable among us — were at stake. I witnessed change-makers taking a stand for the greater good. Here are some people who are carving out the new, more responsible way forward for the World Bank, IMF and beyond…

Jessica Evans of the Human Rights Watch challenged World Bank officials on incorporating human rights into new banking safeguards. She said that in the past the World Bank didn’t touch corruption because the institution wasn’t supposed to engage in politics according to its policy of the past, but now fighting corruption is fair game and a larger part of the World Bank’s mission. She pointed out this ability for the bank to change in a positive way on corruption, but its failure to do the same considering human rights.

She (Jessica Evans of the Human Rights Watch) claimed that human rights should not fall into the ‘political’ category. They are a necessity for responsible lending practices and should be incorporated into the current safeguards as they are being rewritten now, not as an afterthought a year later when they will be completed. 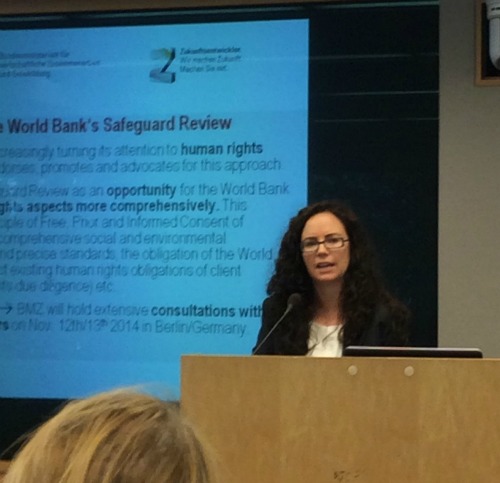 Jessica Evans of the Human Rights Watch speaks about the importance of human rights on a World Bank Civil Society Meeting in Washington, DC. October 7th, 2014.

To my surprise, I also had the chance to reconnect with a fellow Villanova University alum, Joseph Robertson, now Strategic Director of the Citizens’ Climate Lobby. He questioned Dr. Kim, President of the World Bank, and Mme. Lagarde, President of the IMF, on carbon pricing during the Civil Society Town Hall. Joe is championing a coalition called Pathway to Paris, which is seeking to mount a global coalition effort “to secure an agreement to motivate carbon pricing country by country.” 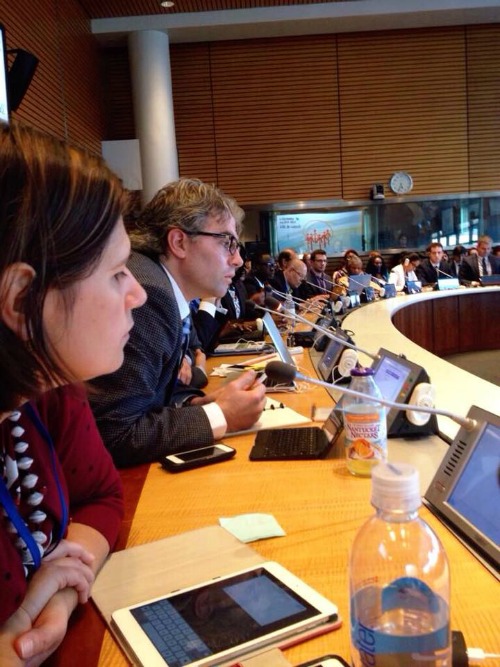 I also met the bold, Faith Nwadishi, Executive Director at the Koyenum Immalah Foundation, who had come so many miles — from Nigeria — to Washington, DC to put pressure on organizations to come together in the fight against Ebola in West Africa. Faith had no qualms about later taking the spot right next to Dr. Kim during the Town Hall. I was inspired by her energy! 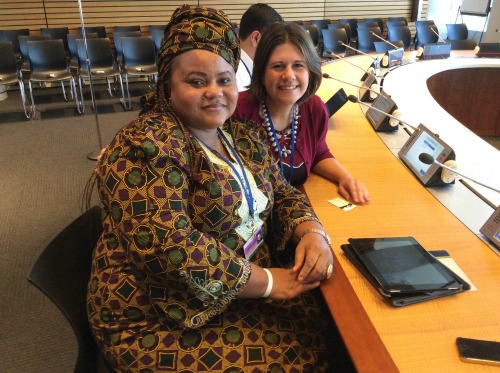 Faith Nwadishi came all the way from Nigeria for the World Bank’s Civil Society Meetings in Washington, DC. Pictured here with Jennifer Burden of World Moms Blog on October 8th, 2014.

And, I could have listened to Patrick from the Congo speak for days. He’s a 28-year old masters student (his second, this one in international development). Patrick is enacting change at home through an organization he founded that educates both, women and men, on rape prevention in Congo. He sees his little sister within every woman in his home country and is dedicated to making Congo a safer place for women. 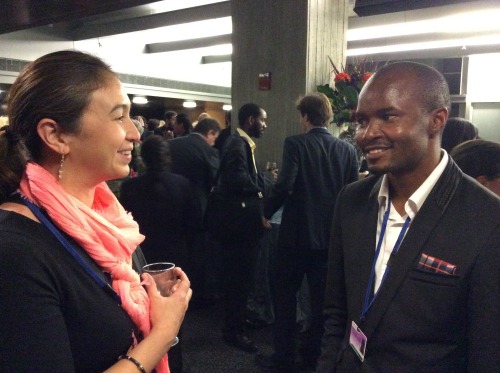 But, the cultural shift at the World Bank Civil Society Meetings is one that encourages change makers to join them in debate, intellectualism, passion, heated discussions and a lot of heart, which are all clearly the silver lining from the bank’s closed door past.

The current bank President, Dr. Jim Yong Kim is even a former bank protester, which is an indicator on how the tide is turning.

It is time for the world to listen to the likes of Jessica Evans, Joseph Robertson, Faith Nwadishi, Patrick and many more change makers around the world. They are the kind of people that will press and lead the World Bank toward it’s goal to end poverty. You can join them, too…what are you waiting for?

This is an original post by World Moms Blog founder, Jennifer Burden in New Jersey, USA. Jennifer and Cindy Levin of Missouri, USA were invited by the World Bank to take part in the bank’s Civil Society Meetings in Washington, DC. See additional posts by Cindy Levin about their experience on her blog, Anti-Poverty Mom:

Keeping It Civil at the World Bank

A Different View of Citizen Engagement at the World Bank

A New Course for the Big Ship of the World Bank

Photo credits to the author and Cindy Levin.

« NETHERLANDS: The Perfect Fit
JAPAN: My Experience with a Japanese Hospital »