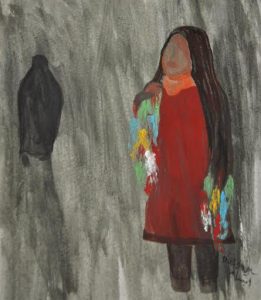 Kids complain about going to school today?  Have them read this guest post, which comes to us from Ibtisam in Oman.  You can find more of her wonderful perspective on her blog: ibtisammusings.com.

Sometime in the late 1960s, there was a six-year-old girl whose father did not believe education was of any benefit to her. However, because her eldest brother took a stand that education was her right, she went to school and was quite intelligent in her studies.  She did not make it to high school, but those first few years meant the world to her.

Fast-forward to 1998.  There was 18 year-old girl who just graduated from high school with grades that enabled her to receive a government scholarship to further her studies. She had a dream of studying somewhere abroad. Her father supported her endlessly without having a second thought about it.

Two women, my mother and me, received a life-changing education made possible by the men in our family.  In our part of the world, and specially for some women, it was like asking for the moon. The sad thing is, that is still the case for many other women.

In 2010, my husband registered me for a Master’s degree course in business administration. I had two children at that time who were 2 and 4 years old. I had a house to take care of, but he believed I could do it, and I did do it with his full and endless support. He ’empowered’ me to do the course before himself, although it is what he wanted to do for many years.

I worked for ten years at a hospital, then I quit to start my own business. I still can remember one woman I know crying as she wanted so badly to start her business and follow her dream, but her husband gave her a hard time and made it impossible for her.

Initially, the thought of quitting my job scared me to death.  Then, the moment that moral support from my husband was there, everything seemed easy. This year, my sister-in-law had an opportunity to work abroad. She found the courage to go for it when her husband, my brother, told her not to worry and that he would support her decision, no matter what it was.

Maybe many will think, ‘how does a man’s decision affect a woman’s choices?’  Well, in my society it does. You can find few girls who managed to follow their dreams despite the resistance they faced. However, this can be so tough and risky in a collectivist society where family ties are sacred.

Maybe we are living the good time for women empowerment in my country and many other countries around us. I hear and read the word ‘woman empowerment’ everywhere in our media.  There are conferences, workshops, lectures etc. on this specific issue. This is the reason why I decided to write this. I have this deep feeling of gratitude towards the men in my life, and for men like them who recognize the rights of women. Without their support, love and encouragement, ‘woman empowerment conferences’ would be a story with a sad ending for us.