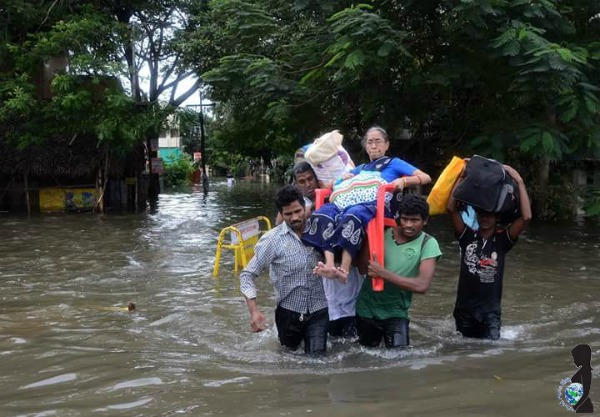 A woman being rescued from her house in Chennai, India.

My family lives in a low-lying area in Chennai, and we are, unfortunately, in the direct line of the reservoir’s outflow. We have been deeply affected by the #ChennaiFloods of 2015.

I’ve listened to to my son’s pleas to go back to his school which has been rained out for over a month. I have been heartbroken and in shock from the news of the many who have died around us from the floods. Helicopters overhead have dropped off supplies to my mother’s neighborhood. It began with a cyclone, and now the floods of Chennai, India have left the region where we live, in a crisis. 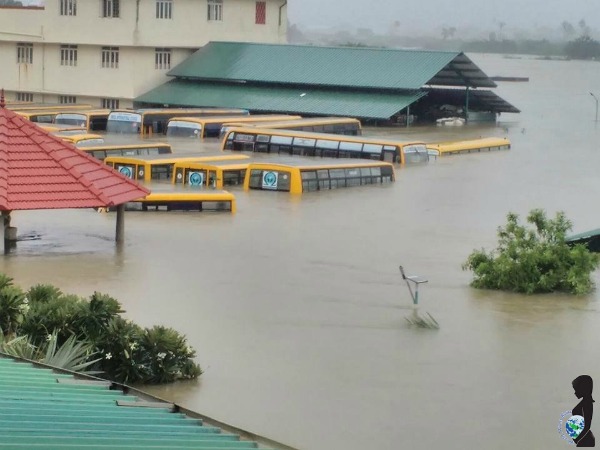 The school of the photographer’s daughter and buses under water in Chennai due to extreme flooding.

It was a wrong call. The people keep on saying this over and over again. In the newspapers. In social media. Chennai has had the highest rains in 100 years, but that is not what has caused our city’s problems. Lapses and error in human judgement, unplanned and predatory city development, high rise buildings on dried up river and lake beds, clogged drain water pipes, and a very poor civic administration are what led to our current catastrophe.

And the reservoirs and dams were opened up at the wrong time. This was a disgrace! 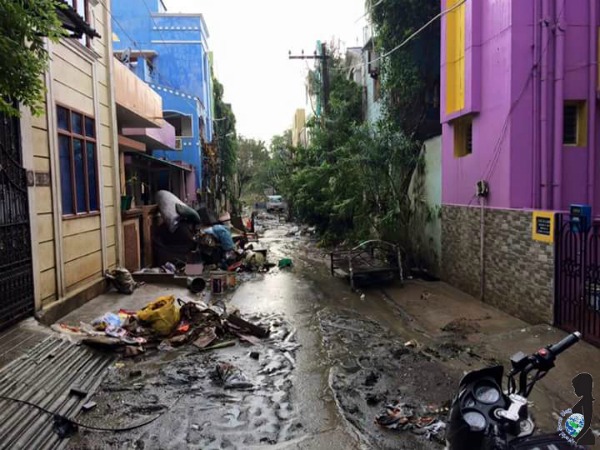 Sedimentary debris left behind by flood waters in Chennai, India.

The government had adequate warning from the weather department, but failed to respond in time. Who is responsible for this? One person’s bad judgment or that of one state government department led to this event which has been called a national disaster and crisis. Over 500 are dead, as bodies are still being recovered from receding waters, with over 1.8 million people losing their homes and possessions, and a net worth loss of $3 billion to the Indian Economy. 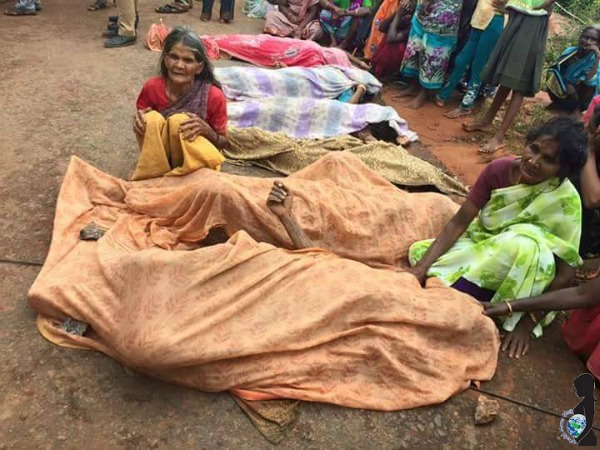 Dead bodies are covered as women mourn. Over 500 people have lost their lives in the Chennai Flood.

The damage is colossal. I am still numb reading and listening to accounts of dead bodies emerging from receding waters and closed highways because of the river in spate. Then there was the opening of Chennai International Airport after a long closure, the naval war ships coming to rescue people from the Chennai seaport, reported deaths in hospitals because of power outages, and the dead piling up and decomposing. Pregnant women were being airlifted from high rise apartments.

During all this, there was just this crazy thought in our hearts as parents, that our son should survive this.

It is our hope that our son survives all this mess, the bureaucracy, and live in a beautiful, safe world. 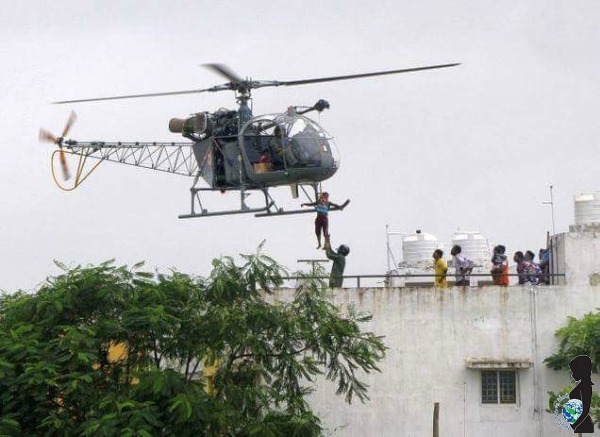 A helicopter evacuates a person who needs medical care in Chennai, India.

On the night of the reservoir opening up, we went over to our neighbour’s place in the first floor (in India the first floor is above the ground floor), because of the fear of flood waters entering our homes on the ground floor. It was with great pain that we left our home (for a single night), which we had built with all of our love and life savings, at a time when we had nowhere else to go. It was far too emotional.

I thought, it’s not the floods, not the waters, not being left homeless or penniless, but it is this great fear in our hearts of  the questions. “What life are we leaving for our son? How are we leaving the earth, for all generations to come? What is happening with humanity right here, before our eyes? How did we, as a community, allow this to happen?”

Yes, the deluge of rain was unforeseen, an act of nature – but Chennai was left unprepared for it.

We have watched apocalyptic movies like “2012″ and “Independence Day.” And, this week, we found ourselves living it.

As we waded through the flood waters to our neighbour’s place on the first floor, my son jokingly said, “Is this how it was like, for Noah, during the great biblical flooding?” We all humored him and laughed with a pain in our hearts. 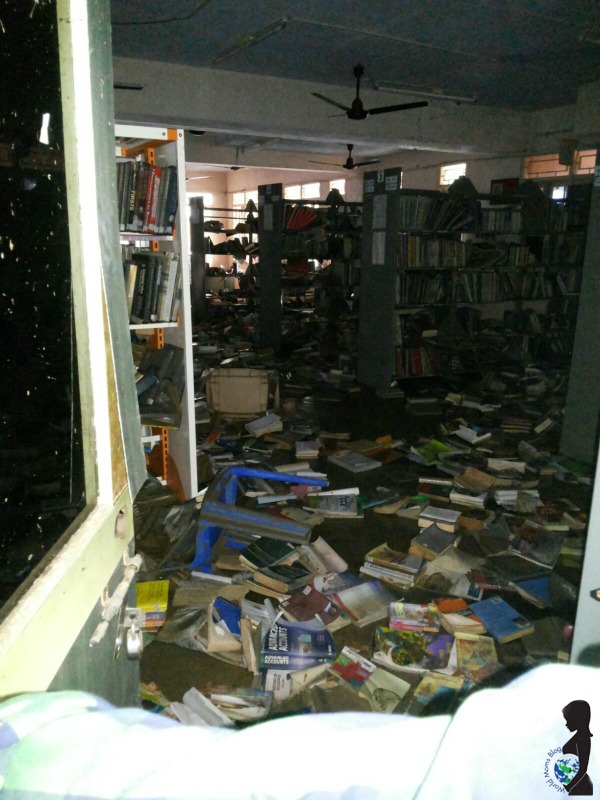 A school library in Chennai that was wrecked by the flooding.

I keep my head up and continue with the strenth of these words from a speech given by my spiritual friend, Shri Parthasarathi Rajagopalachri. It is almost a year since he passed on, but his legacy and love, lives on in Heartfulness Meditation, which he has left behind.

“We have a duty to our race (human beings); We have a duty to the world. We are not just nationalistic, which is very narrow. We are responsible for the universe. One problem in Japan – the tsunami, a problem with their atomic [power] generator and the whole world is shivering. Which wind will blow what towards us? A flu somewhere, and everybody is sick; at all airports there are tests. Today, it is not your country or my country – it is my world. Anything happening anywhere can affect us. Bomb blasts in Mumbai. “Oh, But I am in Chennai.” Where next?

It all stems from the violence in the individual mind of every one of us here. We have violent thoughts. We have thoughts of acquisition, of greed, of power. Our politicians lead the country in this mad race towards destruction. We follow. They want votes based on religion, we are willing. “Who will vote for me?” So in the newspapers you find suddenly the Muslims are pampered, they are given special facilities – for the Muslim vote. In another area, it is the Christian vote. Nobody talks of the genuine vote, the legal vote, the moral vote – and we are prey to all of them.”

“The Veda (ancient sanskrit scriptures) says, let only noble thoughts come to me from everywhere in the universe (aa no bhadraah kratavo yantu vishvatah).”

“Always look at the heart whenever you are afraid, whenever you are going off track. Babuji Maharaj always said, “Don’t trust this head. It is only a thinking thing. It will give you information. It cannot tell you what is right or wrong. When you are in doubt, refer to the heart.”

As a parent, as a mother, as a human being, I want to leave behind a just world where serenity and tranquility prevails.

This is an original post from our UNCA Award Winning World Mom and Senior Editor in India, Purnima Ramakrishnan.

Her contributions to World Moms Blog can be found here.

« World Mom, Julie Dutra of Portugal, is on @BabyCenter Today!
#UNCA Awards: And The Award Goes To…… »