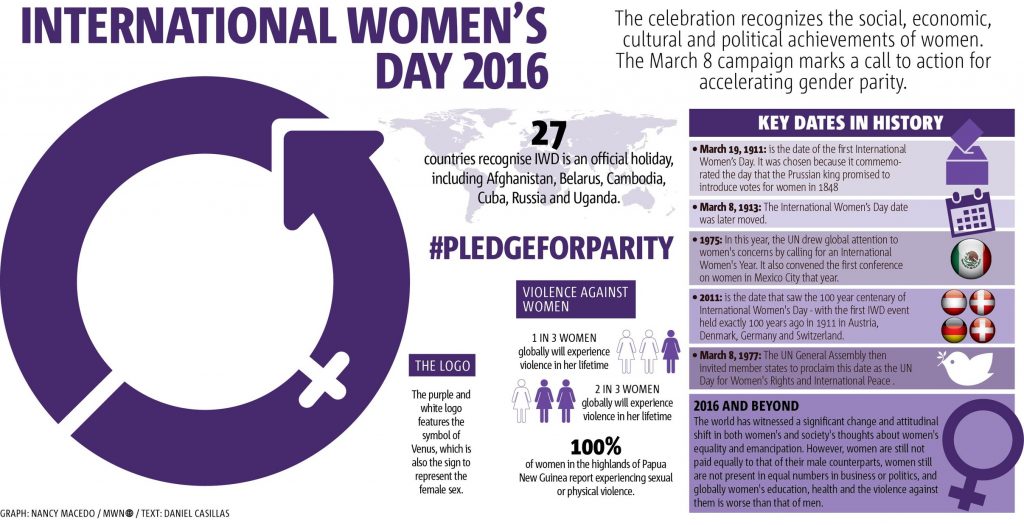 Today – Tuesday, March 8 – people all over the world will be celebrating International Women’s Day (IWD).  IWD events across the globe include marches, rallies, sporting events, art expositions, and festivals with live musical and dance performances. IWD is a national holiday in more than two dozen countries; in some countries, only the women get the day off from work.  If you use Google, you might even notice that the Google Doodle honors the occasion.

But what is International Women’s Day really all about?

The idea for a collective global day  that celebrates women’s solidarity emerged in the early 20th century and was closely linked to women’s involvement in the labor, voting rights and peace movements in North America and Europe.  March 8 has been the global date for IWD since 1913.   The United Nations officially proclaimed March 8 as International Women’s Day during 1975, the UN’s International Women’s Year.  According to UN Women,

Increasingly, International Women’s Day is a time to reflect on progress made, to call for change and to celebrate acts of courage and determination by ordinary women who have played an extraordinary role in the history of their countries and communities.

This year, the theme for International Women’s Day is gender parity. The United Nations observance on March 8 is focused on building momentum for the global roadmap for implementation by 2030 of the new Sustainable Development Goals (SDGs), especially goal number five -Achieve gender equality and empower all women and girls- and number 4 –Ensure inclusive and quality education for all and promote lifelong learning. t their implementation by 2030.

Women and girls make up more than half the world’s population and they are often more deeply impacted than men and boys by poverty, climate change, food insecurity, lack of healthcare, and global economic crises. Their contributions and leadership are central to finding solutions to these global problems. Yet women lag far behind their male counterparts in many areas of economic engagement.

In 2014, the World Economic Forum predicted that it would take until 2095 to achieve global gender parity. But only one year later in 2015, they estimated that a slowdown in the already glacial pace of progress meant the gender gap wouldn’t close entirely until 2133.

For IWD 2016, a group of international corporations have launched the Pledging For Parity! campaign.   According to the website www.internationalwomensday.com:

Everyone – men and women – can pledge to take a concrete step to help achieve gender parity more quickly – whether to help women and girls achieve their ambitions, call for gender-balanced leadership, respect and value difference, develop more inclusive and flexible cultures or root out workplace bias. Each of us can be a leader within our own spheres of influence and commit to take pragmatic action to accelerate gender parity.

Meet Sophie Walker: A World Mom Who is Taking Action on Gender Parity

Sophie Walker was working as a journalist and a diversity campaigner when, last March, a friend asked if she would be interested in helping to set up a new political party. In the run-up to Britain’s 2015 General Election, many voters were frustrated by what they saw as a lack of inclusion and understanding from the other political parties when it came to equal rights and opportunities for women. A group of them came together, spread the word to more, who spread the word across the country – and The Women’s Equality Party was born. Sophie was elected as leader by the new party’s steering committee in July and the party now has 70 local branches across England, Wales and Scotland, and 45,000 members and registered supporters. The Women’s Equality Party (WE) is a non-partisan political party that welcomes members from right across the political spectrum to campaign for equal representation, equal pay, an end to violence against women, equal education, equal parenting and equal representation in the media. Sophie is now standing as WE’s candidate for London Mayor.

“I want to make London the first gender-equal city in the world, where the 4 million women who live here can do the jobs they want to do and walk the streets in safety. London needs a Mayor with some imagination!” – Sophie Walker

This is an original post written by Jennifer Prestholdt, the Human Rights Warrior, for World Moms Blog.