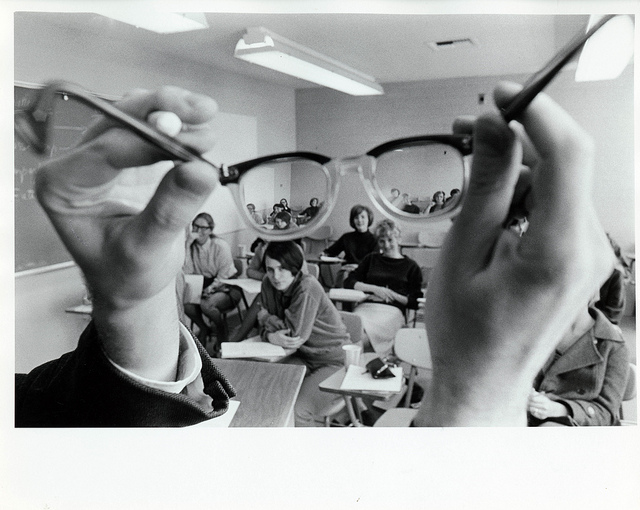 When I was a teenager/young adult I wanted to change the world (as it happens with so many youngsters). And changing the world usually meant Doing Big Things.

Now, three kids and more than twenty years later, my saving the world efforts seem so distant. I grapple with alternating days when I stay home with the kids, sorting socks and washing dishes, and days teaching classes at the university, advising students’ research, and trying to do some research of my own.

At one point of my life I thought my career would be in the non-profit sector; i.e., I would be a professional environmentalist, forever. By then my volunteering efforts had evolved into parallel paying jobs related to social-environmental issues, and this kind of lifestyle went on for 12+ years.

I continued on to graduate school not because I wanted to become an academic, but because I thought it would be a great addition to what I already did. I found it exciting to go from project to project, often working on more than one at once. I felt almost repulsed by the thought of staying in the same job for the rest of my life, always doing the same thing. I even got a certain thrill from not knowing where my salary would come from after the current project ended.

My husband (who worked for the same NGO) was not as thrilled and dreamed of the day at least one of us would have a more stable job. Since I was already on the academic path in one way or the other, that person became me.

When I first became a professor I wasn’t overjoyed. Although I love to do research, teaching is a different story and it was very hard in the beginning. At this point I already had three children and the “saving the world” type of projects were in the past. Another dream that I tried to pursue (to become a professional writer) had also been buried. I sadly realized I wasn’t really passionate about anything anymore – except, of course, my kids.

By this time my husband had gotten a relatively stable government job, although he didn’t really love it. We were finally okay financially and we were living a comfortable life. Nevertheless, we began to question ourselves about our choices.

Were we still living according to the same principles we followed when we first met (especially in relation to the environment)? Were we fleeing our responsibility of making a difference in the world? Had we left our ideals aside for modern, middle class comforts? Were we still being true to our dreams?

At first I had a good excuse to avoid these issues because two of our kids were very small and I had to deal with all of the related motherhood issues. In parallel, I tried to make the most of my job focusing on the good things: stability, flexible hours, and the possibility of quantity time with my children even if that meant doing a lot of work at night and during the weekend. I told myself (and I still do), that there are many means to make a difference, even if in “small” ways.

After all, in practice, there are no real big things. Big things take place in small steps and often need more than one person involved. Also, what seems like small, local things, often involve a lot of work and may have a greater impact on the world than expected. No wonder one of the most popular environmentalist mottos is, “Think global, act local”.

Today, in my attempts to continue to be of service to the world, I try (for example) to be a good listener to my students because sometimes I sense they are more in need of a friendly ear than anything else. A great number of students suffer from depression and other related disorders, for instance. And it’s not that I serve as a psychologist or anything, but I frequently feel that just treating them kindly and making an effort to advise them extra well regarding academic issues makes a significant difference.

Yet the fact is, regardless of how we do in our present jobs, the sort of questions I listed before has been haunting us for the past few years. Now that our youngest is past three, these questions have resurfaced. The biggest issue that remains is how to be true to our dreams and ideals while at the same time guaranteeing enough food on the table (and healthcare, and a good education etc., etc.)?

Please share your story below on how you have managed (or not) to follow your dreams, personally and professionally.

This post was inspired by two other posts: “Surviving the turmoil” and “My frame world”.

This is an original post to World Moms Blog by Ecoziva in Brazil.