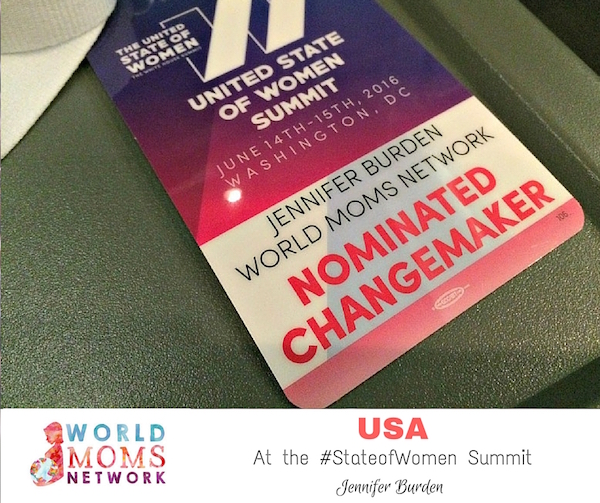 Attendees were asked to arrive prior to the doors opening at 6:30am on Tuesday morning. I arrived at 6:20am, and the colorful line of women’s clothing wrapped for an entire block around the entrance of the Walter E. Washington Convention Center in Washington, DC. While on line, I met Kinda, a woman originally from Syria and who had been living in the U.S. since 2010.

While wearing a golden colored hijab, Kinda explained that she worked as the regional director for the Women’s Initiative for Self-Empowerment (WISE), an organization which seeks to inspire a network of young Muslim female leaders to become ambassadors for women in their community in Dallas, Texas. We spoke excitedly about our roles to advance women, which made our wait to get inside the building fly by.

We parted in the crowd once we got to registration, where we were separated by last name. I made my way through the convention center, grabbed breakfast, and even bumped into a fellow World Mom, Lashaun Martin from the Mocha Moms!

To get a good spot, I  headed to the main room and met another woman who was studying to be a human rights lawyer. We joined the women from the Rape Crisis Center of DC at their table. When they told me about the work they did, all I could get out was a big “THANK YOU!” Here is a photo of us: 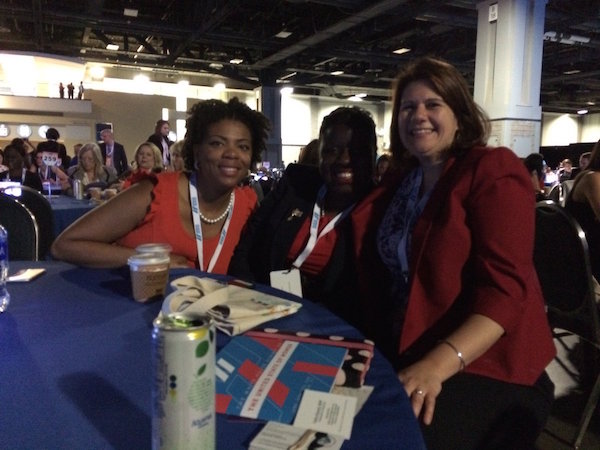 With awesome women from the DC Rape Crisis Center in Washington, DC for the State of the World Women’s Summit on June 14, 2016.

As the crowd was settling down, I saw Kinda, my friend from about all of 30 minutes ago, set her stuff down at a table nearby, and I went over to invite her over to sit with us, and she did.

From June 14th -15th this year women change makers from around the country were all led together by invitation from the White House to attend the first ever United State of Women Summit. Speakers included United States President Barack Obama, First Lady Michelle Obama, Vice President Joe Biden, Save the Children CEO and President Carolyn Miles, US Attorney General Loretta Lynch, Oprah and more.

Introduced by Mikaila, the child entrepreneur behind the now popular Me and the Bees Lemonade, our country’s Commander in Chief took the stage. His first words?

“This is what a feminist looks like!” He was the only one on stage, and the crowd of over 5,000 women applauded with intensity and whoops of joy. — US President Barack Obama 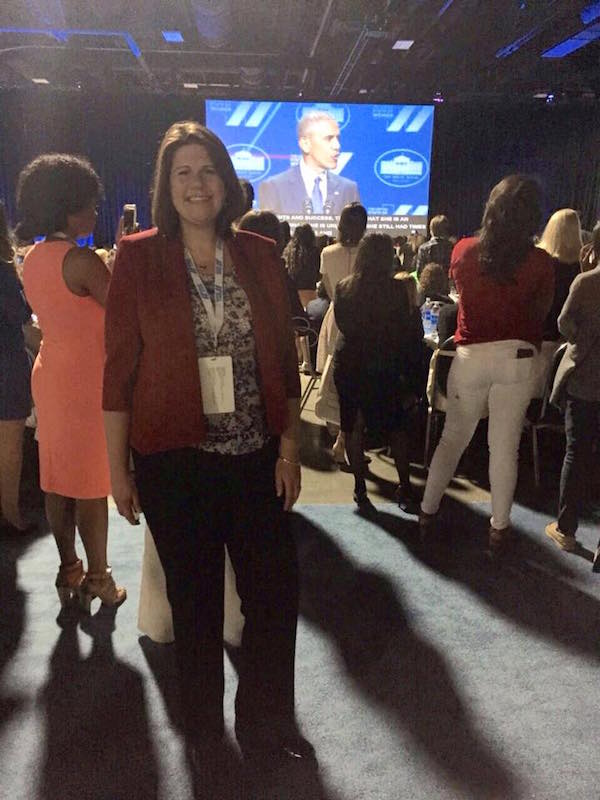 Jennifer Burden proud to be listening to US President Barack Obama speak live at the State of the World’s Women Summit on June 14, 2016 in Washington, DC.

President Obama gave a speech of unity and inclusion. His message was about a country for everyone, regardless of race, belief, sex, or sexual orientation. He mentioned how his daughters and their millennial counterparts saw the world very differently from how the world is today. His girls think it’s strange to treat people poorly just because they are different. How their generaton thinks it’s weird that there hasn’t been a woman President yet. Or that it’s surprising that women make less pay than men.

He also said that we’re on track for women to achieve equal pay by 2080. 2080??? And that the nation needed to work together to close the gap now.

With news of a systematic race problem being unveiled through the powers of social media in the United States, gun violence, poverty and world terrorism, I knew what the President spoke of wasn’t the full reality today in our country, but what we aimed to be. Dreams of unity and equality that we can make it happen. We WILL get there, but everyone needs to play a role on the team. It gave me hope, and I was quite emotionally moved by hearing his words. They motivated me to try harder.

When I turned around to face the table after he spoke, Kinda could see my teary face. She started walking around the circular table towards me, and I met her half way. We hugged. We were pure strangers just a few hours ago. We hugged the hug that we needed to hug after that speech. A hug that we all belonged. A hug that we were all understood. A hug that it is not only ok, but also safe, to be different from one another. A hug that supporting each other should be our normal first intention and reaction above all else. 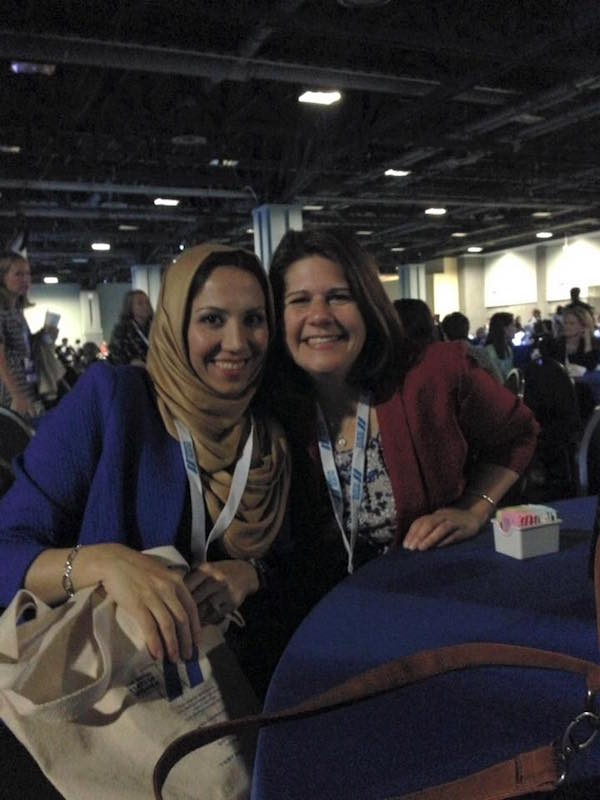 Kinda and Jennifer Burden pose for a photo at the State of the World’s Women Summit in Washington, DC on June 14th, 2016.

This is my America. And I am proud to be a part of it, just one citizen among the many helping to lead it forward in progress. We can all do our part in appreciating our differences and finding ways in which we can work together. For staying positive. For seeing the good in the world, instead of being afraid of what makes us different. For finding what brings us together as humans.

As a part of World Moms Network, we seek to bond together and do our part to help create a world of friendship, peace, acceptance, and understanding. It’s even in our vision statement,

“We envision a world of peace and equality, grounded by our common bond of motherhood.”

We believe it can happen. We’re aiming for it. Join us. Hang out, here, on our website. Sign up for our newsletter. Follow us on social media. Share and like our posts. Comment and share your thoughts on how we can make the world a more peaceful place. Tell us what you’re doing to help achieve these goals from your corner of the world, whether it be a random act of kindness or a major campaign — no step is too small! And we are so interested to know about YOU! This space is for all of us. This project is real. Be a part of our movement — you’re invited, and we’re still just getting started!

This is an original post to World Moms Network by Founder and CEO, Jennifer Burden, in New Jersey, USA.

« ISRAEL: WE CHANGE
A Report of the #Heartfulness Conference from NJPAC, New Jersey »