In 2000, 189 nations made a promise to free people from extreme poverty and multiple deprivations. This pledge turned into the eight Millennium Development Goals, and was written as the Millennium Goal Declaration .- United Nations Development Programme 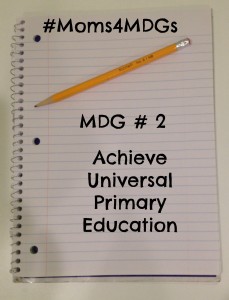 This month as we continue our #Moms4MDG campaign we are excited to be joining forces with Save the Children to talk about MDG #2! Save the Children is an international non-governmental organization that serves to improve the lives of children in developing countries through better education and access to health care. Since 1919 Save the Children has been providing emergency aid to children in natural disasters and relief in conflict or war torn areas.

Millennium Development Goal #2 is to achieve universal primary education.  Children need primary education to reach their full potential, and countries need to educate their children to succeed economically. MDG 2 strives for equal access to education for both boys and girls, and although according to the United Nations, primary school enrollment in developing nations is up to 90%, that still leaves around 57 million kids out of school. Imagine the progress that could be made with that many more educated minds.

Join us tomorrow on September 18th for our #Moms4MDGs Twitter party to discuss Global Education and MDG 2 with Save The Children. Twitter Party participants will have the chance to win a giveaway from National Geographic Kids! We hope to see you there. 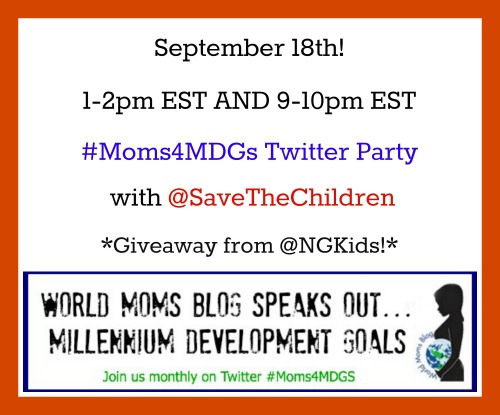 Now head over to World Moms Blog contributor Martine De Luna’s post about MDG 2 on the Save the Children site!

This is an original post to World Moms Blog by World Voice Editor, Elizabeth Atalay of Documama in Rhode Island, USA.