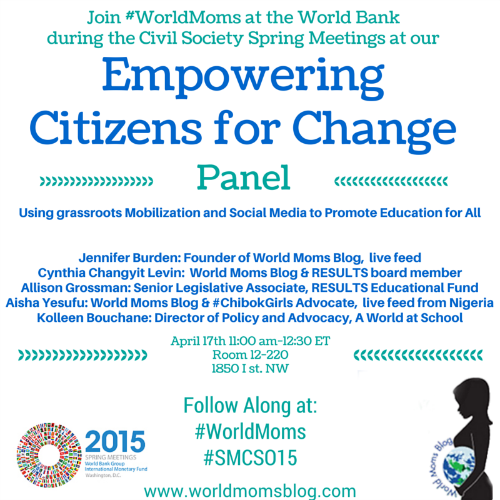 This week, World Moms Blog was invited to take part in the World Bank/IMF Civil Society Meetings in Washington, DC. I had the opportunity to be there Tuesday and Wednesday, and World Mom, Cynthia Levin, took over for Thursday and Friday.

The World Bank has a long history of lending since Breton Woods in 1944 when it was established after World War II. But, over the years it has also lended to projects that have had a negative impact on the local people in developing nations. And after years of protesting the World Bank, anthropologist and Partners in Health cofounder, Dr. Jim Kim, has been at the helm of the bank as President for the past 3 years.

The protests have now been brought off the streets and members of the public have been invited inside around the World Bank and IMF fall and spring meetings to represent the people in the countries where the bank lends. So, all is perfect now, right?

Development isn’t easy. There are still challenges when it comes to lending and looking out for the societies receiving the loans. The topics are intricate in the bank’s mission to end poverty and are reflected in over 50 different panels that are being presented at the meetings.

1) Not everyone here is from DC. The Civil Society Meetings attract and bring in a host of civil society members across continents to come and join in the conversations around poverty. In fact, a large portion of the meeting panels were pitched by civil society members. They are helping carve out the bank’s future practices (safeguards), providing new points of view by representing the people from their home countries and networking with their counterparts abroad to trade best practices and solutions.

2) Dr. Kim, World Bank President, says that the world can end extreme poverty by 2030. In 1993 41% of the world’s human population was living in extreme poverty (under $1.25 per day). With the help of the UN’s Millennium Development Goals (Do you remember our #Moms4MDGs campaign last year?) that percentage has been reduced to 14% in 2014 (data is still coming in to confirm this projected number). Statistics are according to the World Bank.

3) Some of the people on the planet who may be most affected by climate change know nothing about it. In the Pathway to Paris working panel on climate change, civil society members from Hoduras and Bolivia explained that when your focus is that you need to eat, climate change is not on the minds of people, but how to get food is. And they stated that when people are aware of the climate change problem, they expect that it is a problem to be dealt with by the developed world.

4) The consequences of radicalization and violent extremism in fragile societies is a popular emerging topic of interest among civil society members. There was a packed crowd (think Tokyo subway car) in the panel on the consequences of radicalization and violent extremism, and I didn’t get in! I really wanted to listen in on the conversation, but noted it was a high priority on civil society’s agenda as something that needed to be changed.

5) To reach the goal to end extreme poverty faster, the World Bank sees the importance in partnering with faith-based organizations. There were several panels on Wednesday, including a flagship event, that included members of the world’s largest religions discussing their motivations to help the poor from their faith. The key takeaway was that although the World Bank is a secular organization, there are benefits to ending poverty faster by working together with faith based organizations.

6) Human rights has not been written in as part of the World Bank’s safeguards and civil society is protesting. A man from the LBGT community, chased out of his home country of Uganda, asked the World Bank executive directors why they continue to lend to countries who do not value the rights of their people. Also, during a round table discussion with executive directors from the World Bank and the IMF, a woman from South Africa asked for a moment of silence for children who had died from the impact of a World Bank development project (I do not know the details of the project she was referring to.). Afterwards, a group of civil society members stood in unity with her wearing or holding yellow shirts demanding human rights be written into the bank’s safeguards. Civil Society members are standing up for their rights and joining the conversation to try to change bank policy.

7) The smallest member of the World Bank Group is MIGA. MIGA stands for Multilateral Investment Guarantee Agency and has only about 33 employees and lends in the the most fragile states. For example, they were lending in Afghanistan when bullets were flying!

8) The official twitter feed for the IMF/World Bank Civil Society Meetings is “SMCSO15”. This is according to the postings in the meeting rooms at the World Bank. Twitter also self-populates with another hashtag being used, “SMCSO2015.” The twitter feed picks up on the flagship panels that are broadcast live to the public, which makes the online conversation awesome around ending poverty. You can check out our post from earlier this week on those flagship panels that have live feeds.

9) The open meeting policy at the World Bank allows the bank to hear and anticipate the effects of their lending in ways they haven’t in the past. Could you imagine if every business had this type of open meeting policy where civil society could pitch panels on the way in which it lends to better society? Although born out of unfair lending practices and people protesting the streets of the past, this model is ground-breaking. And the world needs ground-breaking when it comes to getting people out of extreme poverty and achieving the sustainable development goals of 2030.

10) World Moms Blog’s panel on grassroots advocacy and social media in support of universal education is a go! On Friday, April 17th at 11am ET, World Moms Blog’s Cynthia Levin (USA & also of RESULTS), Aisha Yesefu (Nigeria) and myself, Jennifer Burden (USA), will team up with Allison Grossman of RESULTS and Kolleen Bouchane of A World at School to discuss ways in which civil society members can ignite change in getting more children into the classroom. Today, over 57 million children of primary school age on the planet are not being educated. The topic is vital and also very timely with the passing of the 1 year anniversary this week of the capturing of the Chibok Girls of Nigeria. We hope you will join us on Twitter under the hashtag #WorldMoms and #SMCSO15.

We agree that civil society should be a part of the conversation to effect change. You can join the World Bank Live Feed this week, too.

This is an original post to World Moms Blog by founder, Jennifer Burden in the USA. The World Bank has provided funding for Jennifer and Cindy to attend the meetings this week to help engage more members of civil society in the global discussions to end poverty, but has not directed our voice.

« TANZANIA: A Letter to my Daughter, On Her Fourth Birthday
JAPAN: Daily Duties »